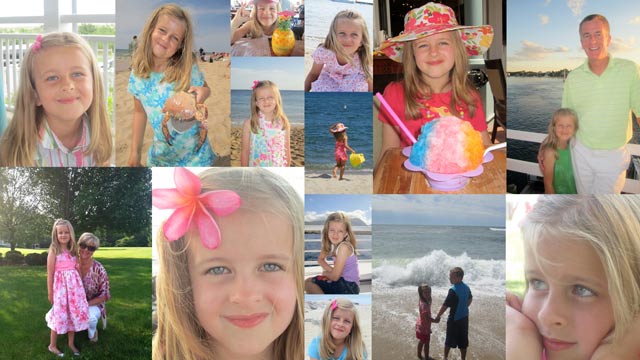 When first-grader Grace McDonnell got on her school bus headed to Sandy Hook Elementary school Friday morning, she looked out the window at her mother and blew kisses to her. That image will always be in the heart of her mother. Sadly, later that morning, Grace was killed at the school, along with 19 other children.

Tonight on 360, Grace’s parents share that beautiful memory of her and so many others. Lynn and Chris McDonnell sat down with Anderson to talk about how Grace touched their lives and the lives of those who knew her.

“Grace had such a great spirit. She had a kind and gentle soul. She was the light and love our family,” Grace’s mom, Lynn, told Anderson. “In so many ways she taught us so much,” she added.

“She taught us you have to live for the future, happiness and peace,” said Grace’s father, Chris. And “not to divert your energy to hate and anger.”

Grace’s parents say the hardest part was having to tell their older son, Jack, what happened to her. They say the entire family will move forward without anger, because that’s what Grace would have wanted.

“I told Jack that he could never live with hate. Grace didn’t have an ounce of hate in her. And so we have to live through Grace and realize that hate is not how our family is,” said Grace’s mom. “She was all about peace.”

In just seven short years, Grace lived life to the fullest. Her parents say she was happy every day. They say she enjoyed everything: Especially school, the beach and drawing. They say her dream was to live on the beach and be a painter.

In honor of her love of drawing, her mom, dad and brother did something special for her Sunday night. They covered her white casket with their own art work, their own precious memories of Grace. They used markers to draw peace signs, along with x’s and o’s and other pictures. “When we walked out of there, there was so much color. It was so Grace,” said her mom.