Teacher read to kids during shooting

After 18 years in the classroom, Janet Vollmer trusted her instincts when her school was under attack by a gunman. She read to her 5-year-old students at the Sandy Hook Elementary school to keep them calm, and took precautions to ensure their safety.

Aimee Seaver's daughter survived the school shooting in Newtown, Connecticut. She talks to Anderson Cooper about explaining the incident to kids with gentle honesty.

Principal Dawn Lafferty Hochsprung's professor and friend remembers her as a dedicated, passionate and fearless educator.

In an emotional statement, President Obama expresses his condolences for those who perished in the shooting at Sandy Hook Elementary School in Newtown, Connecticut.

Here's part of what the president said:

"This afternoon, I spoke with Governor Malloy and FBI Director Mueller. I offered Gov. Malloy my condolences on behalf of the nation and made it clear he will have every single resource that he needs to investigate this heinous crime, care for the victims, counsel their families.

"We've endured too many of these tragedies in the past few years. And each time I learn the news, I react not as a president, but as anybody else would as a parent. And that was especially true today. I know there's not a parent in America who doesn't feel the same overwhelming grief that I do.

END_OF_DOCUMENT_TOKEN_TO_BE_REPLACED

A former classmate and bus driver of the Connecticut school shooter describe him as a nice, typical kid.

Letters to the President #1425: 'The shootings in Connecticut'

Reporter's Note: President Obama spoke this afternoon about the shootings at an elementary school in Connecticut.

When I was a child, gunmen did not shoot up schools. We’ve always had sociopaths, sadists, and simply cruel people among us; and yes, they’ve visited their horrors upon the rest of the population, including children, since the dawn of humankind. But I repeat there was a time in quite recent memory when gunmen did not descend upon hapless children in a place where they ought to be safe.

Now these shootings, while not common, happen with such regularity that their newsworthiness is judged more by the number of fatalities than by the shocking nature of the crime. Because, to be honest, unless the shootings are big, I’m not sure they shock us anymore.

I can think of almost nothing more tragic.

What has become of us that this is a part of the fabric of our society? How does any society reach a point where normal parents, on normal days, think twice about dropping their kids off at school for fear of the unimaginable happening?

I ask those questions sincerely, because I don’t have the answers. Some will blame the availability of guns, or our violent media, or our culture that grows outraged at each incident, then grows bored with trying to figure out why it happened, and then grows complacent that it won’t happen again. Others will say these events are just something that occurs, like a human storm. “When a population is as large as ours,” they say, “the odds dictate that now and then someone will do something terrible.”

I don’t know who is right. I wish I did. All I know is that there was a time when it didn’t happen this way. There were assassins among us. There were mass murderers. There was even the odd shooter who appeared on a college campus. But the idea that every year or so, a gunman would wade into school children was unthinkable precisely because it did not happen. And though I don’t spend my days pining for the past, in that regard I wish our country was the way it used to be.

You were kind and good to express your condolences to the community in Connecticut today. As I have grown older I don’t pray enough and I’m never sure if God is listening. But I will tonight and I hope he is, for the sake of all those families whose hearts were forever broken by today’s tragedy. 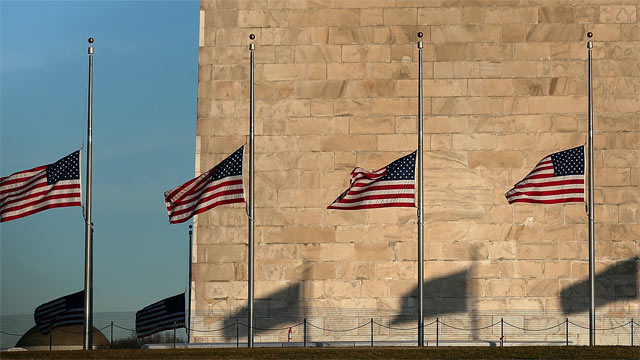 END_OF_DOCUMENT_TOKEN_TO_BE_REPLACED

Dana Bash, David Gergen and Gloria Borger discuss why Susan Rice withdrew her name from consideration for secretary of state.