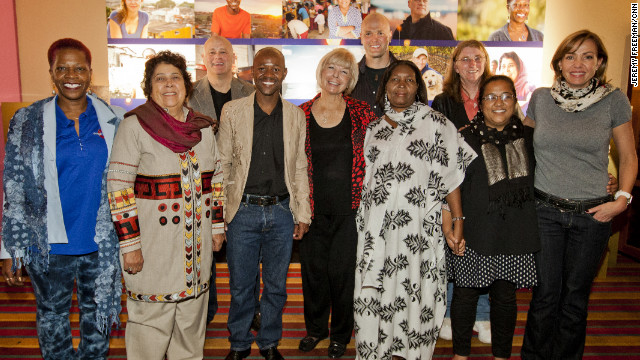 Sunday: An awards show for the selfless

For the past six years, CNN has been honoring everyday people who are changing the world.

The tradition continues Sunday night, when the top 10 CNN Heroes of 2012 will be recognized at the Shrine Auditorium in Los Angeles.

"CNN Heroes: An All-Star Tribute" will air live at 9 p.m. ET/6 p.m. PT on CNN's global networks. The show, hosted by Anderson Cooper, celebrates the year's top 10 CNN Heroes, who each receive a $50,000 grant for their extraordinary efforts to improve the lives of others.

At the end of the show, Anderson will announce the CNN Hero of the Year. That person, one of the top 10 Heroes, has been selected by a public vote that ended Wednesday on CNN.com. He or she will receive an additional $250,000 to continue their work.

Reporter's Note: President Obama, as I have noted, probably doesn’t have to do any decorating for the holidays at the White House. The rest of us face a different story…

Contrary to my earnest plans, I did not succeed in putting up all the Christmas lights at our house as I had hoped last weekend. More to the point: I did not put up any. This is a bad thing. I am not some sort of manic Noelophile who must, must, must have the lights twinkling just hours after the Thanksgiving turkey has met its demise, but I have learned over the years that it is rarely good to delay big jobs.

Once, when we lived in Colorado, I was sent on the road to cover a series of stories in the final weeks leading up to Christmas. Each time I tried to board a plane home, another call would come from New York and I would be sent scurrying off to another state. The whole time I was sharply aware of the days slipping by…days I desperate needed for shopping, wrapping, tree cutting, and overall decoration.

Finally, I was set free. I rushed to grab a flight back to Denver from Tulsa, or Detroit, or Tampa, or wherever the heck I was, and I landed in the teeth of a rapidly gathering storm. “No matter!” I howled as I slid into the garage and my wife waved for me to race inside. “I must put up the lights!”

Well, it wasn’t quite that dramatic, but I did decide shortly after hitting the doorstep that not another minute could be wasted, so I ventured out into the biting sleet, bitter cold, and gale force winds with my ladder and an armload of lights. At the time, I was attempting one of those lovely gingerbread-house-like effects in which the eaves of the house would be lined with bulbs. To that end, I had a sack full of plastic clips that could be jammed onto the rain gutters to hold the lights. I’m quite sure that they worked brilliantly in the warm safety of the Chinese factory in which they were made, but in Ice Station Zebra, not so much. As I worked my way along the edge of the house, teetering ten feet in the air, many of the clips skittered sideways out of my grip and fell to the ground, or snapped into pieces as I tried to shove them into place, or simply refused to stay in place. The cold was numbing my face and crippling my fingers. The wind was shrieking around me like one of Dicken’s ghosts. And yet I pressed on, one light at a time.

As I approached the corner of the house, the ground dropped away considerably, forcing me to climb higher on my ladder. Despite warnings pasted to the rungs that I should not “stand above this step” I crept up and up and up. Balancing on the topmost plank like a frozen Wallenda, I reached for the final corner to push a red bulb into place, wobbling dangerously in every gust.

This story does not end badly. Yes, yes, I know, I lead you to expect some grand catastrophe, but that was not the case. I finished the lighting, crept down from my icy perch shivering and vaguely hypothermic, and retreated into the house to await the return of feeling to my extremities.

So what is the point of this tale? As I said at the start: It is not good to let deadlines loom too close. Take on difficult tasks early and accept that you must get them done, even if that means grappling with some unpleasant realities when you’d rather not.

Call if you can. I’ll be around this weekend…yes, putting up the lights.