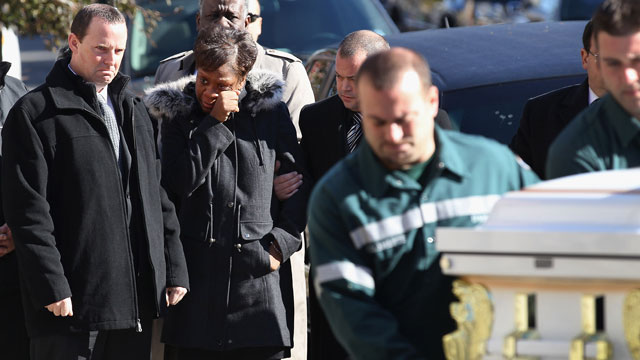 Last week Gary Tuchman reported on the dramatic events that led to the death of two young boys on Staten Island, New York during Superstorm Sandy. Brandon and Connor Moore, ages 4 and 2, were swept from their mother by powerful floodwaters. Their bodies were found three days later near the place where they were last seen alive.

The tragedy is compounded by claims from their mother, Glenda Moore, that she tried desperately to seek shelter in a man's home after her SUV was damaged, but he wouldn't allow them to come inside. The man in question denies that he saw the family, but claims a man asked him for help during the storm and he didn't provide assistance.

The brothers were put to rest today in a single coffin during a funeral at St. Rose of Lima Church in Brooklyn, New York. Mrs. Moore and her husband Damien Moore were inconsolable.

Tonight, Anderson Cooper will honor their memories and the joy they brought to their family.

If you'd like to make a donation to contribute to the costs of the funeral, visit the website set up by a friend of the Moores.