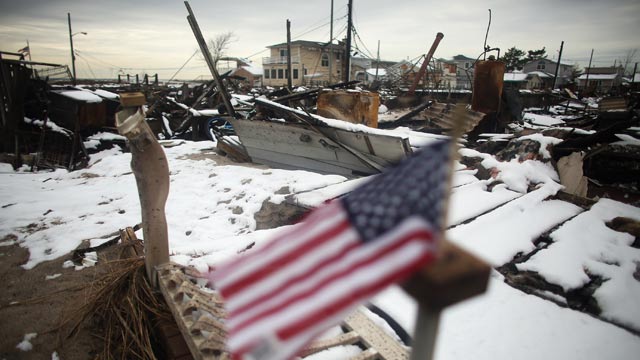 Tonight Anderson Cooper will be live from Staten Island, the New York borough with the highest number of fatalities from Superstorm Sandy. Already reeling from the powerful winds and flooding, the nor'easter brought snow and freezing temperatures this week, along with new hardships for the community.

It was 11 days ago that Sandy destroyed homes and lives in the Northeast. When the floodwaters receded, people were desperate to pick up the pieces, where possible, and return to normalcy. Power came back gradually to homes and businesses in Manhattan and New Jersey, but there are still hundreds of thousands in the dark.

Some storm victims went to shelters, others to stay with family and friends, and there are also people like the Camerada family who are afraid to go. They don't want to risk leaving their Staten Island house vulnerable and attractive to looters who could rob them of everything they have left.

Anderson will talk with New York City Councilman and State Senator-elect James Sanders about why it's taking so long to restore power. Do electric companies like Con Edison and the Long Island Power Authority have requirements that are too difficult for those hit hardest to meet before they can get their electricity back?

And if you've given money to an organization that has promised to help people suffering after the storm, you need to see what Drew Griffin discovered about "pop up" charities. In some cases the scams begin before the disaster even strikes. As you'll find out in his report, they're deviously designed to take advantage of generous donors.

Tune in at 8 and 10 p.m. ET for the latest on the conditions in Staten Island, Queens, and across the region.