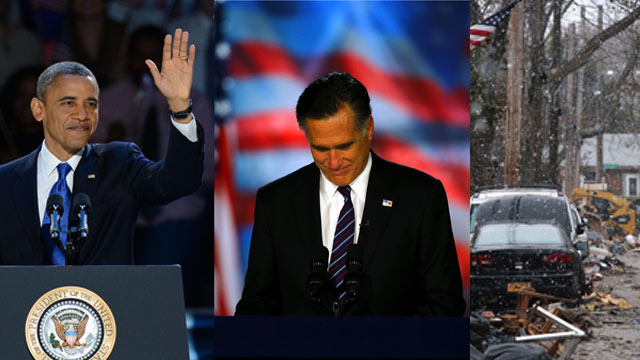 President Obama urged lawmakers today to pass tax hikes for the wealthy in his first public comments since winning Tuesday’s vote. However, House Speaker John Boehner said raising tax rates will “slow down our ability to create the jobs everyone says they want” in a news conference today. With less than a week since Tuesday’s election, the conversation about the fiscal cliff sounds a lot like last year’s and both parties seem unwilling to compromise. We’re Keeping Them Honest. Anderson spoke with outgoing Republican Senator Olympia Snowe, a moderate who’s tired of the infighting and says Congress is obligated to solve problems. CNN’s David Gergen, Gloria Borger, and Mark McKinnon discuss the consequences of the partisan gridlock and what Washington needs to do to avoid another recession.

Anderson also looked at what’s next for the Republican party post-elections. CNN’s Alex Castellanos, Ari Fleischer, Erick Erickson, and Republican Strategist Kristen Soltis discuss what lessons the GOP can learn from Mitt Romney’s loss and the party’s message going forward. Republican Senator Lindsey Graham says his party is going in the wrong direction and its main hurdle is immigration reform. And on the party’s extreme right, CNN’s Gary Tuchman looked at the future of the Tea Party following the 2012 elections. Plus, CNN’s Ari Fleischer and Van Jones talk about the party’s losses during the recent election and how both major parties can learn from the tea party’s strengths and weaknesses.

Anderson will be in Staten Island, New York tonight, which is still trying to recover from Superstorm Sandy and this week's nor'easter.  We'll also have a report on the electric company in Long Island, New York that's come under fire for a slow response to power outages. We’re Keeping Them Honest at 8 and 10 p.m. ET. Earlier this week, New York Senator Martin Golden said FEMA is overwhelmed in New York and it might be until after Thanksgiving before some residents have power back and the residents are suffering. A Staten Island family talked about the dire conditions.

Even though it’s been three days since voters went the polls, Florida has yet to announce both national and local election results. Stay tuned for an update.

Note to students: Don’t wear your college sweatshirt to vote or your clothing might land on our RidicuList!