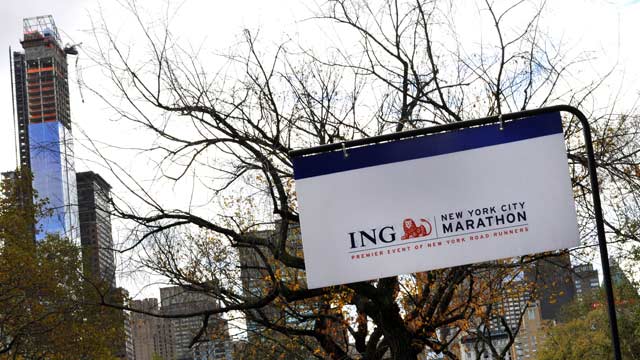 After growing public outcry with hundreds of thousands of storm-ravaged residents still without power and a rising death toll, the New York City Marathon won’t take place this Sunday. “We would not want a cloud to hang over the race or its participants, and so we have decided to cancel it,” Bloomberg said in a joint press release with the New York Road Runners, which organizes the marathon.

“We cannot allow a controversy over an athletic event - even one as meaningful as this - to distract attention away from all the critically important work that is being done to recover from the storm and get our city back on track,” the statement reads.

The cancellation comes just hours after Bloomberg insisted at a news conference the race would go on saying we needed to “give people something to cheer about in a week that's been pretty dismal.” The mayor insisted the marathon wouldn’t divert police or other assets from Superstorm Sandy recovery efforts.

Critics of Bloomberg’s original plan to go forward with the race, the world’s largest with nearly 50,000 runners, said it would divert police. They also insisted all that water for the runners would be better served in the areas hardest hit by Sandy – places like Staten Island where runners gather to begin the 26.2 mile race.

CNN’s Gary Tuchman talked with a Staten Island resident outraged at Bloomberg’s push to keep the race going earlier in the day.

“He's got a nice mansion, nice and dry, and we're freezing our asses off; with no power, no nothing. The man's delusional,” she said.

Meanwhile, plenty of runners were surprised late this afternoon when word spread of the marathon’s cancellation.

We’ll have their reaction tonight on the program and you’ll hear from the president of the New York Road Runners at 8 and 10 p.m. ET.