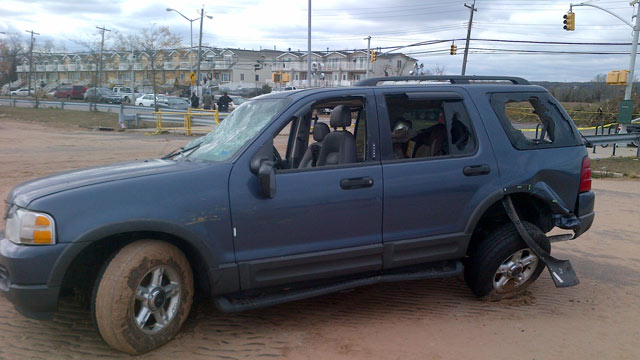 Police in Staten Island, New York have found the bodies of two brothers, Brandon and Connor Moore, swept out of their mother’s arms by floodwaters during Superstorm Sandy. The grim discovery was made this morning by NYPD divers in a marsh.

Staten Island Borough President James Molinaro says the boys, ages 4 and 2, were found “maybe a block or two from where [their mother] lost them.” The parents were there when police found the boys.

CNN’s Gary Tuchman will have this emotional story tonight on AC360°. According to police, the boys’ mother, Glenda, stopped at a man’s house after her SUV hit a hole during the storm. She begged for help and asked to come inside, but that man said no.

Soon after, the mother and her two children were hit by a massive wall of water. The mother desperately tried to hold onto them, but the force of the water was too much. Her two boys were carried away in the deadly floodwaters. Somehow the mother managed to survive.

Gary talked with Alan, the man believed to have rejected her plea for help. He’s telling a much different story. Hear what he has to say tonight.

At least 19 people have died on Staten Island due to Sandy, making it the deadliest location in New York City. Don’t miss our special coverage of the disaster at 8 and 10 p.m. ET.

The fanboat used by NYPD divers to find victims of Superstorm Sandy.

The car seats Brandon and Connor Moore were sitting in shortly before they were carried away by the floodwaters.