I want to think that Sandy is just a passing fling. I know that the weather types came into this weekend talking about all the potential impact this storm might have along the east coast, but I want to imagine in the end everything is going to be pretty ok. I don’t want to think about massive power outages, closed roads, and angry people shivering in dark houses.

By the time you read this, I should be finished running this year’s Marine Corps Marathon, presumably through some of the early rains and buffeting winds of the coming front. The race is one of the few personal indulgences I have granted myself in this breakneck political season. Amid all the weekends, late nights, and early mornings at work, I thought it was not too much to ask that I grab a half dozen hours to get to the race…run it…shower and head back to the job. I don’t mind the storm intruding on that a bit. Truth be told, I’ve always enjoyed running in bad weather and it will probably be fun.

I do, however, hate the idea that of all the variables we have to consider in this political race…that a monster storm has just been added to the list. What could it do to the election? If it just blows through with moderate damage, probably not much. But if it rains hell down upon whole states, shutting down power grids, closing schools and businesses, and generally irritating millions of people…I can’t help but think in some weird way that will influence who votes, and how they vote.

It’s all about that business of voter turnout.

Oh sure, I realize the whole situation could be much worse. We could be eyeballing this storm with the election on this Tuesday, not the next one. Thank heavens that is not the case.

But either way, I just can’t believe that we are here; literally watching the heavens for a sign of what might determine the outcome on Election Day. Ha!

Hope your Sunday is going well. Call if you want and I’ll give you a blow-by-blow on the marathon. I have to rest my legs now. I have a 50 miler in just two weeks! It’s after the election, so if you want to come out, I can send directions. 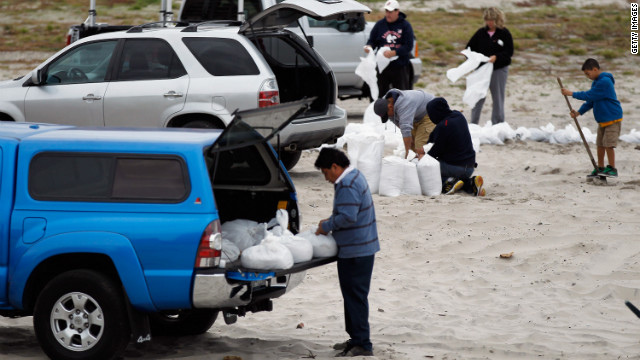 Editor's note: If you live in the mid-Atlantic and Northeast regions, stay safe. Anderson Cooper will report on the impact of the storm on Monday at 8 and 10 p.m. ET.

Here are recommendations on what to do before a storm approaches:

- Download an application to your smartphone that can notify people where you are, and if you need help or are safe. The Red Cross has a Hurricane App available in the Apple App Store and the Google Play Store. A First Aid app is also available.

- Use hurricane shutters or board up windows and doors with 5/8 inch plywood.

- Bring outside items in if they could be picked up by the wind.

- Turn the refrigerator to its coldest setting in case power goes off. Use a cooler to keep from opening the doors on the freezer or refrigerator.

- Fill a bathtub with water.

- Get full tank of gas in one car.

- Go over the evacuation plan with the family, and learn alternate routes to safety.

- Learn the location of the nearest shelter or nearest pet-friendly shelter.