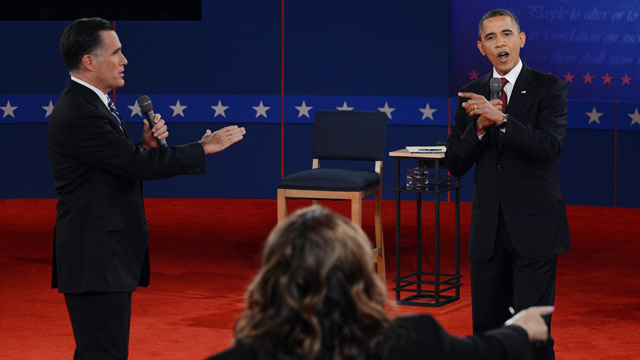 Finger-pointing. Heated confrontations. Tense eye contact. It was all there during last night’s presidential debate. The town hall format gave President Obama and Mitt Romney the ability to move around the stage, like boxers, on the attack.

Tonight, we’ll give you an up close look at the non-verbal messages from both candidates during the more than 90-minute face off. Anderson talks with body language expert Janine Driver and Brett O’Donnell, a former debate strategist for Mitt Romney.

“They were in each other’s space,” said Driver about the first minutes of the debate during the exchange over oil production.

Later, during the skirmish over Libya “the president looked presidential” argues O’Donnell. When Pres. Obama said he called the deadly attack on the U.S. Consulate an act of terror shortly after it happened, Romney questioned him and the president fired back saying “check the transcript.”

Driver says after that fiery exchange Romney “increased his pacing” and didn’t concentrate as much on the uncommitted voters in the audience.

What should both candidates focus on for an advantage in the next debate? Find out what our experts suggest tonight at 8 and 10 p.m. ET.