The only 2012 vice presidential debate came and went and left everyone talking (and tweeting) about each candidate's strong performance. Wolf Blitzer said it "will go down in history." Anderson Cooper called it "riveting." We asked on Facebook how you would describe it and got: Distracting, animated, Putin, war, disrespectful, draw, factual, spicy, wow, educational, chaotic, lively, substantive, buttkicking, fun, outstanding, awesome, interesting, unwatched, pathetic, rehearsed and malarkey, among other words. Have anything to add? Leave it in a comment.

Vice President Biden's reactions are being praised by some as passionate and criticized by others as rude. Photo credit: SAUL LOEB/AFP/GettyImages

END_OF_DOCUMENT_TOKEN_TO_BE_REPLACED

Ahead of tonight's vice presidential debate, Amy Cuddy reveals what facial expressions and non-verbal cues say about the candidates.

Reporter's Note: I assume President Obama will watch the vice presidential debate tonight. I mean, of course, after he reads my daily letter to the White House.

It must be very peculiar to be President of the United States and be reduced to just another TV viewer while your vice president takes center stage in a debate. Of course, considering how your debate went last week you may be happy to be a spectator. Ha! Just kidding. I’m sure you will come back much, much stronger next week.

Vice presidents are strange, in a political sense. They are the back up quarterbacks of D.C.; they’re fun to meet at parties, good guests for ceremonial events, but they’re not really playing the game in a meaningful way. Part of the reason is precisely what we are seeing today; the role for many V.P.’s (barring calamity of course) is to not interfere with the president’s plans; to keep a low profile. That’s because both the president and vice president come from the same party.

I’ve often thought we might be a better nation if we’d never abandoned the older model in which the president was the candidate who received the most votes in the general election, and the vice president was the guy who came in second. Imagine what it would be like if those two offices were routinely held by different parties. I think it would almost certainly cause more dialogue between political foes. An opposition vice president would have a large voice in the public debate. He’d be well positioned to challenge policies that strayed too far left or too far right. And the knowledge that the Oval Office was only a heartbeat away from falling into opposition hands, might make both parties a tad more interested in getting along.

Of course, your party and the Republicans too, would never stand for such a thing. But it sure would be interesting. Heck, even a debate about that would be intriguing.

Anyway…hope you have fun watching tonight. I’ll be on fact check duty as always. Give me a call if you wish. Especially if it gets boring. 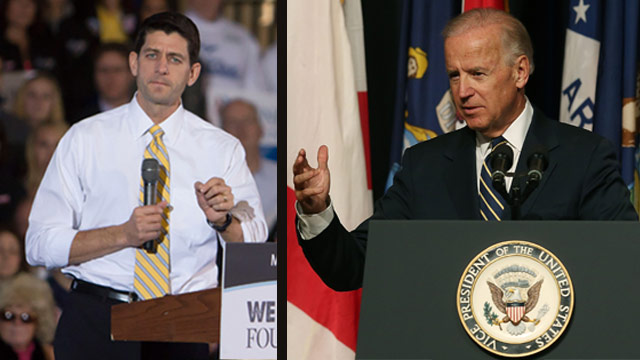 Mitt Romney is tightening the race between him and President Obama, according to several national and state polls released this week. The Romney campaign was thrilled to see the spike, but do both campaigns only accept good numbers and dismiss the bad as irrelevant when they don’t favor their candidate? We're Keeping Them Honest. Also, CNN's Gary Tuchman spent time on the trail with GOP vice presidential nominee Paul Ryan and he spoke with his supporters who said they distrust the polls and the media.

Sean Smith was one of four Americans killed during the attack on U.S. buildings in Benghazi, Libya last month. He was killed in the consulate compound. Anderson spoke to his mother, Pat Smith, who says she "begged" for answers about the assault and how Sean died. She says she hasn’t received any details, which were promised to her by Pres. Obama, Secretary of State Clinton, and Vice President Biden. The State Department responded to CNN and maintains it has been in contact with victims' families.