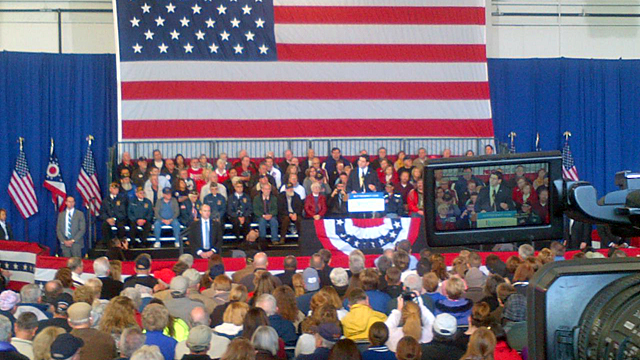 Tonight on AC360: Following Ryan on the campaign trail

A couple of weeks ago I landed in Chicago, on assignment from New York, and drove from there to Rep. Paul Ryan's hometown of Janesville, Wisconsin. It was a beautiful drive through back roads and farm towns with no shortage of cheese shops.

In Janesville I met some of Ryan's neighbors, folks who pointed out the house he grew up in, the high school he attended and they waved at the owner of one of his favorite restaurants. I interviewed the owner of that restaurant for a story about the concerns of small business owners. He was non-partisan during our interview, expressing his worries for the middle class but not his political preference. He is a personal friend of his loyal customer, Ryan, but didn't make it known if he shares his politics.

As I drove through town that day, I was surprised by the deficit of 'Romney-Ryan' signs. I saw many 'Ryan' signs on lawns and windows supporting his congressional race and a few 'Obama-Biden' signs but none, that I saw, supporting the GOP presidential ticket.

In Ryan's hometown I heard from his hard core supporters and could feel their enthusiasm. I’ve seen him fire up the Republican base at campaign rallies across the country, arguably getting some crowds more excited than the top of his ticket.

In late September it seemed to catch the attention of Mitt Romney himself at a stop in Vandalia, Ohio. The Governor, who was on stage with Ryan, encouraged the crowd to stop chanting 'Ryan, Ryan, Ryan.' Instead, he lead by example and chanted into his mic: 'Romney, Ryan!' 'Romney, Ryan!’ ‘Romney, Ryan!’ Some caught on.

This week my assignment is to better understand those Ryan supporters. I'm following the vice presidential candidate to his final campaign stops before the debate on Thursday night. Gary Tuchman and I joined him in Ohio and Michigan to bring you a glimpse of the people at these rallies, especially Ryan loyalists.

There's a lot to explore when it comes to Ryan followers. They lit up Twitter recently with their “girls and guns” pictures and have tried to convince Rep. Ron Paul supporters to step in line with Ryan in order to defeat the Democrats next month.