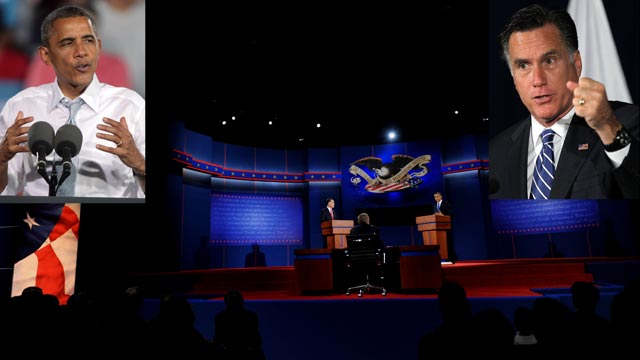 What everyone’s talking about:
A photographer that accompanied Iranian President Mahmoud Ahmadinejad to the U.N. General Assembly has applied for asylum to the United States. “He's perceived as not being a supporter, or being an opponent of the Iranian regime… somebody who has betrayed the regime and who can no longer be trusted by them, said Paul O’Dwyer, the photographer’s attorney. CNN’s Deb Feyerick has the story.

In Crime and Punishment, students say a sixth-grade teacher in Minnesota segregated his classroom by putting black and special needs students in the back of the room. Timothy Olmsted was placed on leave in January, (added comma) then resigned later this year.(period)  But he is still getting paid. CNN’s Gary Tuchman has the story.

Anderson recapped the best moments from past presidential debates and spoke to Harvard Business School’s Ann Cuddy about former candidates’ body language and how it affected voters’ perceptions.

A post-debate dissection and another conversation with Harvard Business School’s Ann Cuddy and CNN’s Gary Tuchman on Pres. Obama and Mitt Romney’s body language and how it translated with voters tonight at 8 and 10 p.m. ET!

Tension between Turkey and Syria continues. Turkey shelled a Syrian military position for a second day on Thursday, while Syria called on Turkey to restrain its military and apologized for shelling a day earlier, promising it would not happen again. Turkish parliament passed a law which authorized the deployment of its troops further into Syria. The most recent violence started Wednesday when Syrian shelling killed five people in a Turkish border village. Also on Wednesday, NATO said it stands Turkey, a treaty organization member. After an emergency meeting, NATO stated that the alliance "demands the immediate cessation of such aggressive acts against an ally, and urges the Syrian regime to put an end to flagrant violations of international law…" CNN’s Ivan Watson has more tonight on the situation.

Tune in on Thursday, October 11th at 9 p.m. ET for the first and only Vice Presidential debate between Republican V.P. nominee Rep. Paul Ryan and Vice President Joe Biden.

The AC360° staff is open to exotic dishes, but when it comes to roadkill, we have to draw the line. Look at what landed on the RidicuList: