Fran Townsend, Bob Baer and Jomana Karasheh discuss the security situation in Libya as the U.S. investigates the attack on the U.S. Consulate.

"The military and the FBI don't know what they're up against in Benghazi and they have to put a lot of force on the ground," Baer says. They need to plan for the possibility of an attack by going in with the right type of weaponry.

Israeli Ambassador: Red line is to prevent war with Iran

Israeli Ambassador to the U.S. Michael Oren says the red line with Iran should be the last point at which we can act to stop them from getting a nuclear weapon. He identifies that as 20% enrichment, which means completing 90% of the bomb.

A new cosmetic craze that looks extremely painful, and oddly could have you thinking of donuts, earns a spot on the RidicuList.

Sen. John McCain talks about the way the Obama administration reacted to the attack on the U.S Consulate in Benghazi, Libya, and the how challenging it will be for the Libyan government to control militias.

Laura Rebell Gross believes the presidential candidates need to support education initiatives and instill confidence in students. Her profile is part of AC360's series "What Keeps You Up at Night," which focuses on election issues. 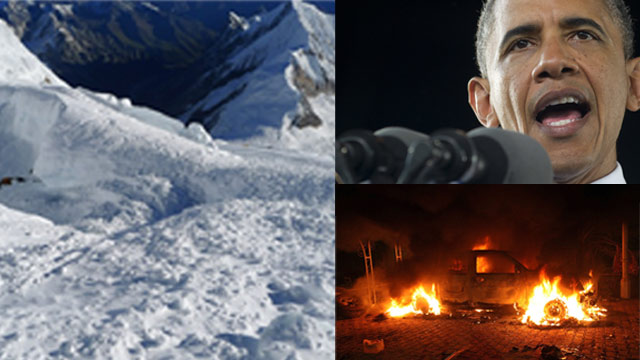 Republican presidential nominee Mitt Romney continues to double down on his claim that President Obama has dropped the welfare work requirement and insists that his TV ads are “spot on.” However, FactCheck.org’s Managing Editor Lori Robertson argues his claims are “not true.” We’re Keeping Them Honest.

While President Obama had a strong message for Iran and the Muslim world in his U.N. address on Tuesday, he did not hold any official bilateral meetings during his visit to New York. This makes him the first president in recent memory who did not meet with world leaders during the U.N. General Assembly. Republicans are critical, but the administration explained why they think it’s a non-issue. Anderson spoke with CNN’s David Gergen and Fareed Zakaria on the importance of a president’s personal relationships with foreign heads of state.

END_OF_DOCUMENT_TOKEN_TO_BE_REPLACED

Can a crime scene that hasn't been secured 16 days after the incident still prove to be valuable to an investigation? That's a question many are asking about the U.S. Consulate in Libya. Tonight Anderson will get Sen. John McCain's response, as well as his perspective on the handling of intelligence before and after the attack.

McCain is outraged that the Obama administration at first pointed to an anti-Islamic video as the impetus for the violence. "They were either incredibly naive or willfully deceiving the American people," he said.

END_OF_DOCUMENT_TOKEN_TO_BE_REPLACED

Letters to the President #1347: 'Crossing the job creation threshold'

Reporter's Note: President Obama has been hounded throughout this campaign by the simple fact that he’s been unable to create as many jobs as we’ve lost during his term…that is, until today.

So lo and behold here come some new numbers out of the Labor Department saying in fact you have added jobs since taking office! Congratulations! I know that this has been a sore point for some time, and even though the numbers appear to be just barely tipping your way, my guess is that you’ll find that better than having them tilt against you.

As I understand it, this turn of events happened this way: Every time we get a jobs report it is based on preliminary numbers, and sometimes when the number crunchers look a little closer, it turns out that the final estimates are lower or higher than the originals. They believe some of the assessments earlier this year were low balls; that the economy, for example, added 50,000 more jobs in a month than previously thought. Something like that. Anyway, altogether it now appears that since you took office the economy has lost 4.3 million jobs, and gained 4.4.

I realize that is not a lot to celebrate. After all, in raw numbers, we’re talking about a net gain of 125,000 jobs, or a little less than one-third of Tulsa. So I don’t expect to see you whooping it up on the campaign trail over this new stat. On top of which, you can bet your presidential seal that some of your political foes are going to suggest that the Labor Department is fudging the numbers to help you.

Still, even considering all that, we’re all better off to be on the winning side of that equation rather than on the losing side.

Certainly we have a long way to go. Breaking even in terms of jobs lost/jobs gained over four years is hardly a sign of a robust economy. But if such numbers, modest as they may be, convince more voters that the economy is finally, actually heading in the right direction…well, that could signal the coming of a whole new political climate in D.C.

I trust all is good with you and the family. You and Mr. Romney are traveling so much; I hope you’re both getting as much rest as you can and washing your hands a lot. I’d hate to see one of you getting too rundown before the campaign is even over. Call if you can.

Extreme skier Glen Plake reflects on his time with his now-missing colleagues.