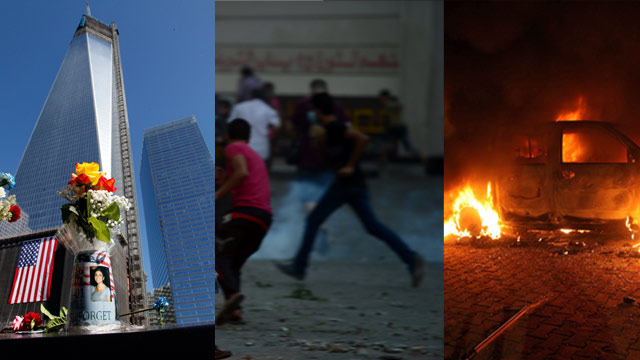 U.S. Ambassador Chris Stevens and three other Americans were killed when the U.S. Consulate in Benghazi, Libya was attacked on Tuesday. At least one Libyan has been arrested and three or four others are being sought out, the Libyan prime minister said Thursday. Anderson took a look at Amb. Stevens’ life and his work with the Libyan opposition after Moammar Gadhafi’s fall. And Sen. John McCain reflected on his friend’s efforts to spread democracy. McCain also stood by Mitt Romney’s swift criticism of the Obama administration’s response after the attack. “This president is weak in his leadership,” he said. CNN’s Christiane Amanpour, Former CIA Officer Robert Baer, and Princeton University’s Anne-Marie Slaughter gave their perspective on the attacks and the aftermath in the region.

September 11, 2012 marked 11 years since the 9/11 attacks. There was renewed controversy over the possibility of warnings ignored by the Bush administration in the months leading up to the attacks. Author Kurt Eichenwald had a heated debate with Ari Fleischer about intelligence contained in classified presidential daily briefings and what was presented in The 9/11 Commission Report. The anniversary also came a day after a federal program added 58 cancers to the list of illnesses covered for first responders and survivors exposed to the toxins at Ground Zero. As always, 360 remembered the innocent lives lost that day, and their families who keep their memories alive.

Since protests began in Libya and Egypt on Tuesday, violence and outrage has erupted all over the Middle East, including demonstrations in Israel, Gaza, Libya, Egypt, Yemen, Sudan, Tunisia, Morocco, Iraq, Iran and among Muslims in the Indian-controlled region of Kashmir. One of the largest protests occurred in Egypt, leaving 13 protesters and six police officers injured, according to Egyptian government officials. Anderson will talk with CNN’s Ben Wedeman, Senior Fellow at Stanford University's Hoover Institution Fouad Ajami, and CNN National Security Contributor Fran Townsend about the escalating protests at 8 & 10 p.m. ET.

Images of the anti-American protests have been seen around the world, and questions remain about who is behind the anti-Islam movie that sparked the violence. CNN’s Miguel Marquez has the story tonight on 360.

In July, Savannah Dietrich, 17, was threatened with contempt of court after she tweeted the names of two teenage boys who sexually assaulted her and photographed the crime on their phones. She thought their plea bargain deal was too lenient; the punishment was 50 hours of volunteer work and a diversion program, which if completed, could remove the assault from their records. She was also angry over the judge’s warning to be quiet about the case. Since then, the contempt motion was dropped and court documents have been unsealed. Gary Tuchman will report on the case and allegations about the prosecutor’s connection to the boys.

Join us in congratulating CNN’s D.C. bureau on their new studio and…Wolf Blitzer on his new glasses. See his new look on the RidicuList!