Letters to the President #1319: 'Highlights… and Lowlights from the convention'

Reporter's Note: I write to President Obama all the time. I’m sure we’re both tired of it. Ha!

I just wanted to run down a few of the odd moments I’ve encountered during my stay at the Republican convention here in Tampa. I’m sure I’ll get a whole new collection of them next week at your Democratic gathering too, but I thought I’d pass these along in the meantime.

-I went for a run along the waterfront and saw an osprey flying overhead holding a small fish which kept wiggling. (Who could blame it?) Moments later I spotted a wet, dirty Santa Claus hat on the shore. It was like jogging through a David Lynch film.

-While roaming around the convention hall, I was set upon by a man who wanted to hold an extended conversation about redistribution of wealth. No matter how times I assured him that I am a journalist and accordingly have no opinion that I’d care to share on the matter, he kept after me like a dog on a pork chop.

-I passed a giant fiberglass elephant in a hotel lobby, went into the men’s room, and while an attendant refreshed the towel supply, I heard Janis Joplin singing on the speakers overhead. “Take another little piece of my heart…” It just seemed peculiar.

-While waiting in line for a Cuban sandwich, I heard some woman in line behind me come completely unhinged about something that had happened in some behind the scenes meeting about the vote in Virginia. I have no idea what she was talking about, but she was really going at it.

-Kid Rock performed (at least so I am told) somewhere, and very late in the night as we headed back to our hotel we passed a river of very happy young Republicans who told us it was awesome.

-And last, but far from least, I saw some sort of protester… heaven knows what his cause was… wearing a rubber boot upside down on his head, and blowing into a plastic, inflatable bat. When it was full, he proceeded to yell some phrase I could not possibly make out and started whacking himself on the head. It was wild.

That’s it for now. As you can probably tell, after a week of talking politics, listening to speeches, watching interviews, and running into politicos around every corner, I’m getting balmy. Hope you are well. Call if you can.

RNC: What does Romney need to do tonight?

CNN's panel of analysts and strategists talk about what they think Mitt Romney needs to do to win over the RNC crowd.

Anderson Cooper and CNN's political panel discuss whether parts of Ryan's speech were factual or not. 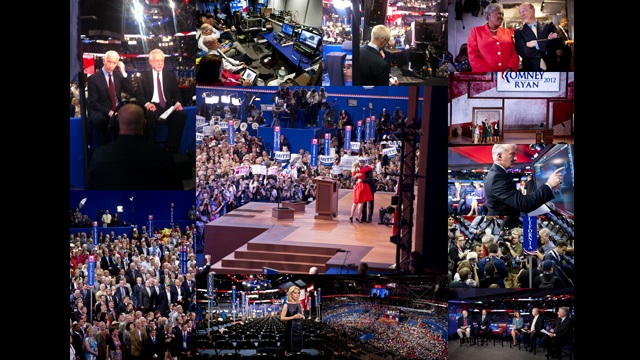 Tonight on CNN – Live at the Republican National Convention

Watch special coverage tonight from 7 p.m. – 1 a.m. ET.  Anderson is reporting live at the Republican National Convention in Tampa, Florida. Anderson will talk to CNN Correspondents throughout the convention hall previewing and fact-checking the speeches.