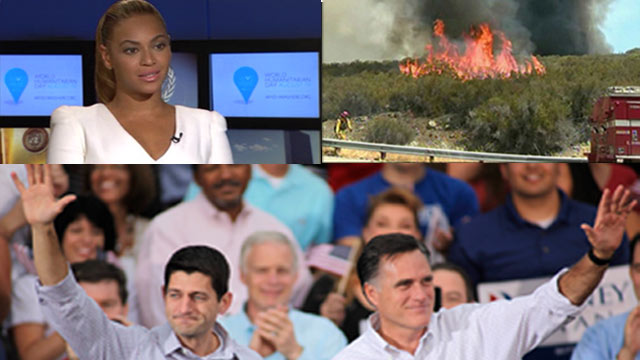 The FBI is hoping you can help them find one of their Ten Most Wanted Fugitives. Eric Toth vanished four years ago, but only recently was added to the agency’s infamous wanted list – replacing Osama bin Laden, Toth, a former Washington D.C. school teacher and computer whiz, is suspected of crimes associated with child pornography. The FBI is offering $100,000 for information leading to his arrest. CNN’s Tom Foreman has the story and former FBI profiler Mary Ellen O’Toole has insight on how child predators groom parents to have access to their children.

Syrian government forces continued attacking Aleppo today. At least 200 people were reported dead across the country, according to the opposition Local Coordination Committees of Syria. CNN’s Ben Wedeman was in Aleppo where he and his team were dangerously close to the line of fire near a hospital earlier this week. The bloody aftermath was heartbreaking; injured children and helpless caregivers.

Beyoncé is teaming up with the United Nations to raise awareness about upcoming World Humanitarian Day and encouraging people to participate in their communities. The singer told Anderson she is trying to set an example of how small acts can make a difference. He sat down with her and U.N. under-secretary-general and emergency relief coordinator Valerie Amos.

We spoke to Rosemary Putnam who said she was “petrified” when a wildfire was bearing down on her property in Washington state. She escaped with her four horses before her home was lost in the blaze. At least 70 fires are raging across 13 Western states, according to the National Interagency Coordination Center. CNN’s Dan Simon has the latest for us tonight at 8 and 10 p.m. ET.

The deadly standoff between a homeless man and six Saginaw, Michigan police officers was caught on video. CNN has purchased the video of the July 1 incident and we'll make it public for the first time tonight on AC360. CNN’s Jason Carroll will report on the community’s reaction and the state police investigation into the shooting.

We’re having a RidicuList countdown all week! So far the winners include Carpool Guy, the David Hasselhoff iced coffee ad thieves, and the "Crapper Scrapper." Vote for your favorite video and look out for #1 on Friday!