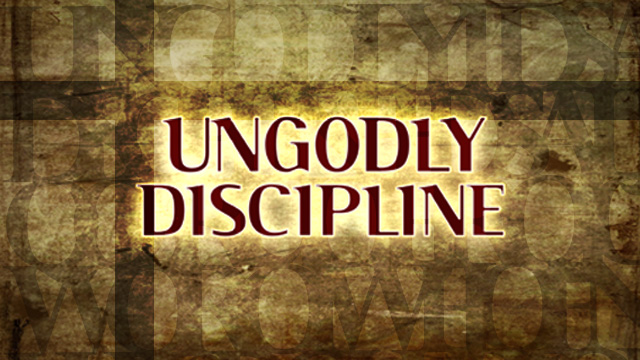 Some parents, school administrators, and church leaders across the country believe it’s necessary to physically discipline children in their care. CNN’s Gary Tuchman spoke with those who do it because, they say, they’re acting in the name of God.

The AC360° investigation began when parents of 7-year-old Lydia Shatz pleaded guilty, and were sent to prison, after their young adopted daughter was beaten to death. They claim they were following teachings in a book by Michael Pearl. Pearl co-authored “To Train Up a Child” with his wife as a guide for parents on raising their children in accordance with the Bible.

Tuchman spoke with the Pearls who explain their method of spanking, and say they’re not to blame for Lydia’s untimely death. To demonstrate the technique and force that’s used, Mr. Pearl hits Tuchman during the interview.

Also in the program, former students of a religious boarding school in Montana accuse the pastor and school leaders of abuse, including choking. The owner of Pinehaven Christian Children’s Ranch, Bob Larsson, says his mission is to impart a love for God to the students. The state government has no oversight of religious institutions, which you’ll learn more about in tonight’s report.

END_OF_DOCUMENT_TOKEN_TO_BE_REPLACED

Reporter's Note: President Obama is hoping to hold onto his job this fall, and that may depend in large part on how well he helps other Americans hold onto theirs.

If I had nothing else to look at but the unemployment reports for the past three years or so, I’d have precious little faith in your re-election plans, and the latest numbers released today would do nothing to help that situation.

I’m sure you’ve seen the new stats. The jobless rate is creeping back up a bit. More jobs were added than expected, but still not enough to keep up with the number of young people entering the job market. So we’re making progress…but only kind of.

Interestingly enough, what matters is not so much the absolute number when it comes to unemployment, as the trend. Presidents can weather pretty rough economic storms if things seem to be heading the right direction by the time of the next vote for the Oval Office. For example, Jimmy Carter lost the presidency in 1980 with a 7.5 percent unemployment rate. Ronald Reagan, just four years later, with a 7.2 percent rate. Those numbers are pretty darn close. What was not so close was the trend: President Carter was watching the rate get worse in the months leading up to his re-election vote, while President Reagan was watching it get better.

Of course there are other factors, but that pattern seems to have repeated itself in plenty of runs for the White House. So where do you stand? Overall the unemployment rate has been slowly dropping since it shot up in your first year. That’s the good news for you. The bad news: This year it has pretty much stalled; neither getting better nor worse. What’s more, it stalled above 8 percent. The last president to survive a re-election bid with unemployment even close to such dangerous territory was Ronald Reagan in 1984, and the rate at his re-election was only 7.2 percent.

Maybe you and your team can overcome all this. It is possible you can convince enough voters that you are on the right track despite such numbers. But I just wanted to let you know, the trend and history say that is going to be a very, very tough trick. And if you succeed, you’ll make history once again.