Letters to the President #1285: 'The new normal...Olympic edition'

Reporter's Note: President Obama is no doubt going to keep an eye on the Olympics in some fashion. Perhaps he can use the other eye to read my daily letters.

Here is something I just don’t want to hear from any of our Olympians: “Well, you know, I’ve always thought of myself as just a normal person.”

It seems like there is always some athlete who comes out with a gem like that during an interview, and while I understand their intent, I am convinced that nothing could be further from the truth. I have had the privilege of being around some actual athletes (as opposed to the weekend warriors we all know, who are athletic…but not athletes) and they are not at all like any normal people I know.

They are stronger, faster, taller, bigger…pick whatever kind of laudatory “-er” you want. More than that, they are usually, absurdly single-minded when it comes to excelling at their sport. While most of us grouse about having to get out of bed for an early shift at the office, a top runner may vault from his warm blankets at 4:00 am in the dead of winter, to launch himself onto the icy streets and grind out fifteen miles before breakfast. Then he’ll do it again tomorrow. And the next day. And on and on and on.

They relentlessly test the limits of endurance, concentration, and will. They hyper-drive muscles, tendons, bones, and joints. They grapple with the forces of physics, fight against the pull of gravity, and wage unstoppable war against their own frailties.

Hope all is well. Go USA! 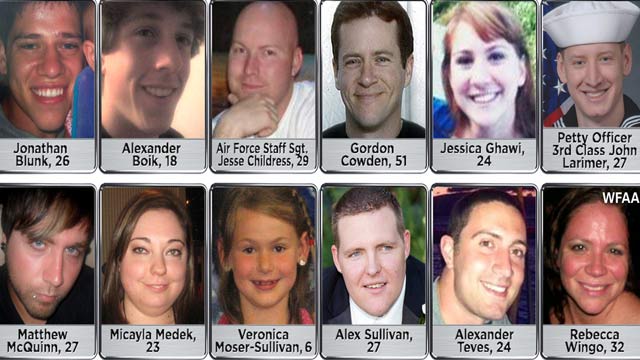 It’s been a week since a gunman stormed through an emergency exit, into a crowded movie theater, dressed head-to-toe in tactical gear and armed with several weapons. He fired on a helpless crowd, while his apartment was booby-trapped to cause more harm miles away.

After the chaos quieted, we learned 12 innocent lives ended and 58 survivors were wounded. Countless witnesses and loved ones are now coping with the trauma of the senseless violence. A week later, and the grieving process is so new for the families of those who died. Their reality is still setting in — life without their mother or father, sibling, child, cousin, best friend.

Since the massacre, AC360° has focused on the dozen dreams and futures cut short. We’re honoring the victims and what they lived for, not just talking about how they passed away. Anderson has spoken with family and friends who shared beautiful stories, funny memories and inspiring lessons they learned from those killed in Aurora, Colorado.