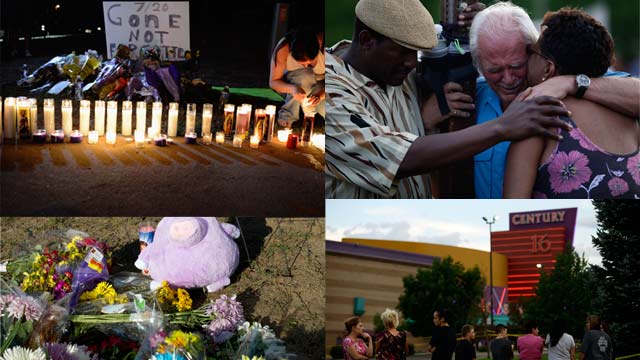 We’ve been doing our best to focus our attention on the victims of the Colorado shooting that left 12 people dead and 58 injured last week. Anderson told the stories of each victim, some of their goals, interests, and legacies.

Jessica Ghawi, 24, was the first known fatality. Her brother told Anderson he wants his sister and the other victims remembered, not the suspected killer. Anderson also spoke to the girlfriend of Jon Blunk, 26, who shielded and saved her when the suspect entered the theater and started firing rounds into the audience. Alex Teves, 24, also died saving his girlfriend. Alex’s father attended the alleged gunman’s first court appearance and sat in the front rows of the courtroom: “It’s not about him. I just wanted to see him and I wanted to see there’s people who care and aren’t afraid of him,” Tom Teves said. Alex Sullivan was turning 27 and celebrating by going to the midnight movie. Anderson spoke with his father, who siad, “He was my best buddy in the whole world.” And the youngest victim’s babysitter tried to save her. Kaylan, 13, attempted to help 6-year-old Veronica Moser-Sullivan after she was shot by placing her hand on her ribcage to see if she was breathing: “I felt like it was partly my job to protect her. She was just a child,” she said. Rebecca Wingo, 32, was a mother of two and had served in the Air Force for 11 years. Her best friend Kate Wodahl told Anderson that Wingo was “vibrant” and “was always there for anyone that needed her, all the time.”

One survivor, Petra Anderson, was shot in the head, but survived because of a brain condition she didn’t even know she had. Allie Young was saved by the selfless act of a friend. Katie and Caleb Medley were in the theater days before their first baby would arrive. Katie and the baby were unharmed in the attack, while Caleb is still recovering from serious injuries. CNN’s Randi Kaye has their stories.

Tonight we have the remarkable story of Pierce O’Farrill, 28, a survivor who was shot three times in theatre 9 by three different weapons the gunman was using. “I felt him literally standing right above me,” O’Farrill said. “The first thought going through my head was that he’s just, he’s just going to finish what he started…I thought that’s it, this is it.” CNN’s Randi Kaye also has the story.

CNN’s Drew Griffin continues his investigation into a charity that claims to help U.S. veterans. We’re Keeping Them Honest. New information at 8 and 10 p.m. ET.

The violence in Syria is still escalating and many are saying it may have reached a tipping point. Members of Bashar al-Assad’s military and opposition fighters are battling back and forth in key Syrian cities, including Aleppo. Today 163 people were killed in Syria, according to the Local Coordination Committees of Syria.

CNN’s Ivan Watson is in the country and told Anderson that the opposition fighters are more organized and taking over villages “meter by meter, foot by foot.” We has exclusive footage from an award-winning documentary filmmaker that shows the impact the fighting has had on Rastan, a city that went from a population of 55,000 to just a few thousand. CNN’s Diane Magnay has the story tonight.

Jury selection is complete in the murder trial of Drew Peterson, a former-Chicago police officer who is accused of killing his third wife and is the leading suspect in the disappearance of his fourth. Opening statements are scheduled for Tuesday. We’ll bring you the developments in the case.

And the Third Eagle of the Apocalypse, Wiliam Tapley, returns with a campaign song that you won’t be hearing at a rally...you can find it on our RidicuList!