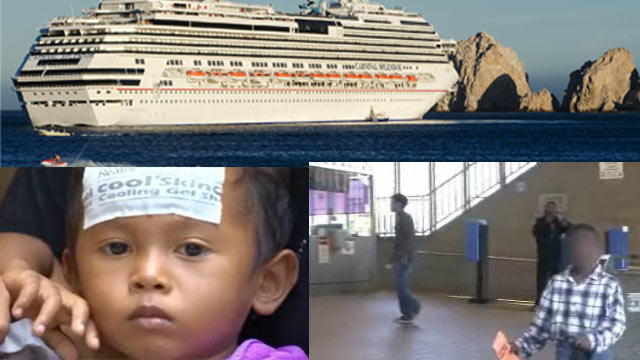 A 360 investigation reveals why cruise ships may not be as safe as they seem. CNN’s Drew Griffin spoke with a teen who says she was sexually assaulted by a man who unlocked her cabin door. And a former cruise security guard is speaking out about what he thinks makes female passengers vulnerable while vacationing on a ship.

A child as young as six or seven begged for money at a subway station to collect funds for his California religious school. To CNN’s Gary Tuchman, it looked like a modern version of Oliver Twist. When he approached the adult who accompanied the boy, the story took another twist. In the latest installment of AC360’s “Ungodly Discipline?” reports, find out who runs the school and what criminal allegations they’re facing.

Doctors have finally identified the illness that killed more than 60 children in Cambodia. A combination of three pathogens is to blame, and the inappropriate use of steroids contributed to their deaths. Anderson spoke with CNN’s Dr. Sanjay Gupta about how the mystery was solved and why the children were given steroids in the first place.

There’s new evidence in the saga of Michael Marin, an ex-Wall Street trader who swallowed an unidentified substance in a courtroom and died a short time later. The dramatic scene happened moments after he was convicted of burning down his home as part of an alleged insurance scheme. CNN’s Ed Lavandera reports on new details in this bizarre case.

A scathing report about Penn State’s handling of the Jerry Sandusky sexual abuse scandal was released today. The 267-page report exposes the disturbing decisions made by university leaders to conceal Sandusky's crimes, allowing a child predator to continue victimizing children in a culture of secrecy. It also states that part of the motivation for a cover-up was to "avoid the consequences of bad publicity."
Anderson talks about the implications of the report with CNN Legal Analyst Jeffrey Toobin and Justine Andronici, who is representing three of Sandusky’s victims. See that interview tonight at 8 and 10 p.m. ET.

San Bernardino, California is the third city in the state to file for bankruptcy. But there’s more to the story than economic challenges. Law enforcement officials announced a criminal investigation. There are allegations that falsified documents were used to hide the city’s financial crisis. We’ll have that report next week on AC360.

We’ve featured many unconventional thieves on our RidicuList, but none have gotten the same serious reporting as these "BBQ chip bandits!"