Mayor Bloomberg's remarks about a pun heavy speech at Nathan's Hot Dog Eating Contest are added to the RidicuList.

A congressional report shows some members of Congress, their staffers and other government employees received special preferential treatment on loans from former mortgage-lender Countrywide Financial.  They received “sweetheart deals” by being part of the “VIP program.”

In this Crime and Punishment investigation, Ed Lavendera takes an in-depth look at the peculiar case of Michael Marin. The eccentric 53-year-old collapsed last week in a Phoenix courtroom and later died in a hospital after he was convicted of burning down his 10,000 square foot, multi-million dollar mansion.

Marin was a few months away from owing lenders a payment of approximately $2 million when he destroyed his Biltmore Estate home in July 2009. The Phoenix Fire Department investigator who handled the case told Lavandera that he found four places in the house where fires were intentionally created. The investigator also said Marin escaped from his burning home wearing scuba gear, including an oxygen tank and snorkel, that just happened to be ready to go in his bedroom.

END_OF_DOCUMENT_TOKEN_TO_BE_REPLACED

Pets separated from owners during wildfires wait to be reunited

Letters to the President #1263: 'Hay bales and balderdash'

Reporter's Note: President Obama is on a campaign trip, so I hope his staff will either forward my daily letters, or keep them until he gets back

In every Presidential race, as sure as the sun rises, you politicians start acting like…well, actors. Democrat or Republican, conservative or liberal, you all go out there and start riding around on buses, wearing casual shirts, and eating in diners like you just finished third shift at the local cannery. You’re doing it this week, and I just have to laugh.

There is always lots of homespun humor, and feigned enjoyment of local delicacies: Barbeque, catfish, funnel cakes, corn dogs, cheese steak, shrimp, and corn on the cob. Sometimes there is a good-spirited try at horseshoe pitching, football tossing, or bowling and yes, we all remember how that went for you last time…ha!

Petting dogs seems to be fully approved by the advisors. So is baby kissing, of course. Standing in front of big pieces of equipment like bulldozers, cranes, and tractors appears to be popular. I’ve noticed that you all love appearing on the floors of factories as if, in between your fundraisers, you’re helping grind out some ceiling trusses or something like that.

But there is nothing you guys love more than farms! I mean, for crying out loud, you were standing amid hay bales today! Not the big, round bales like most farms actually use, but the old, small rectangular ones like I used to work with when I was a kid. You know who uses those small bales these days? People running petting zoos, pumpkin patches in the fall, and politicians…who like to stand among them as if they are, once were, or might someday be farmers. Which they aren’t, weren’t, and will never be.

Admit it: It’s all just a big charade. I suspect that neither you nor anyone else who has a shot at winning the White House really has any idea what life is like for the rest of us anymore. Sure, you try to understand our existence, but as a practical matter you and Mitt Romney both long ago left behind anything that even vaguely resembles a typical life in this country. And now I don’t think you can even imagine it; not really. Neither of you will ever again worry for one instant about having a roof over your head, or a nice car, or powerful friends, or good health care, or a secure retirement. It’s not your fault. You’ve both succeeded in seizing your part of the American Dream and no one should fault you for that.

But when you come out to see the rest of us and act like you are somehow the same as us…I just think a lot of voters don’t buy it, no matter how casually you dress or how many hay bales you toss around.

Not trying to wreck on you and in the show business of politics I am sure nothing will change…but just thought I’d mention it. 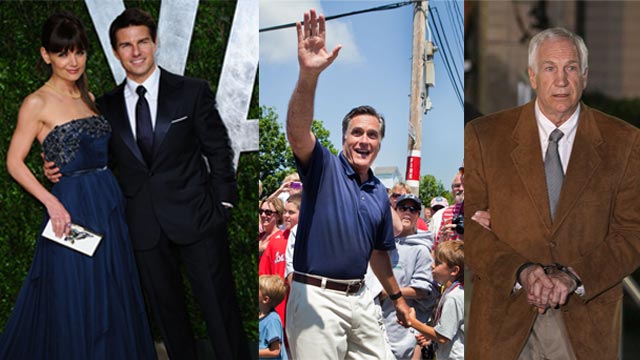 This week a celebrity divorce is making countless headlines and stirring speculation. Does Tom Cruise's Scientology faith have anything to do with the breakup of his marriage to Katie Holmes? CNN ‘s Tom Foreman looks at Cruise’s role in the Church.

END_OF_DOCUMENT_TOKEN_TO_BE_REPLACED

Some members of Congress, their staffers and other government employees received special preferential treatment on loans from former mortgage-lender Countrywide Financial, a House panel found. They received “sweetheart deals” by being part of the “VIP program,” according to report from the House Oversight and Government Reform Committee.