CNN's Gary Tuchman follows an elite team of firefighters who parachute into the front lines to battle the Colorado wildfires.

In the debate about the health care law, Republicans call the mandate a tax, while Democrats say it's a penalty. We're Keeping Them Honest.

Republicans want to repeal parts of the health care law by using a process requiring 51 percent of the vote in Senate. CNN’s Dana Bash explains.

Letters to the President #1260: 'Darkness falls'

Reporter's Note: I write to President Obama each day, rain or shine.

When that big storm swept through D.C. Friday night, the power in our house vanished faster than a Congressman in a brothel raid. Our nights have been ridiculously dark ever since. During the daytime, as temperatures skyrocket, the inside of our house heats up like a Weber grill.

Everything in the refrigerator and freezer has been ruined. The dog is depressed. My wife and younger daughter (the older one thankfully left for college on Saturday…“Get on the plane! Save yourself!”) are descending into heat-induced madness; hoarding canned goods and staring for hours at a dripping faucet. The neighbors, I’m pretty sure, are staring at the sun all day and hallucinating. The whole community is like a bad remake of Lawrence of Arabia without the sand.

And throughout all of this, the best guess our power company can give us about when the electricity will return? Shortly before midnight. Next Friday. That’s right, a tad more than a week from when the lights blinked off. Mind you, neither my neighborhood nor any of the dozens I have toured since the storm look like war zones. Yes, there are more trees down than usual, but nothing like what I have seen in even minor hurricanes or strings of tornadoes in which, I might add, the power was restored much, much faster.

I have been around a lot of natural disasters. I understand the challenges involved. I know that the work it takes to recover from a big storm can far exceed the imagination of most folks. But based on all I have seen in more than 30 years of going to such calamitous events, I also know this is ridiculous.

Which brings me to health care. Perhaps you wonder sometimes, when you seem so intent on doing something good for the American people, why so many voters remain skeptical about the ability of government to get the job done…even if they like the idea.

This, I think, is why. Power companies, while private, operate under the auspices of government; government permission, government regulation, and government oversight. So when they can’t get something relatively simple right (like say, getting the lights back on), that failure shakes the faith of citizens everywhere about the effectiveness of government in all spheres. It’s not your fault. Not even directly the fault of government. But I think it is just that simple for many people. And in sweltering, dark houses all around D.C. tonight, you can bet a lot of citizens are thinking twice about how much they can…or should…count on government to play its role effectively, especially when it comes to dealings with the private sector.

I’d tell you to call, but you know, the phone is not working either. 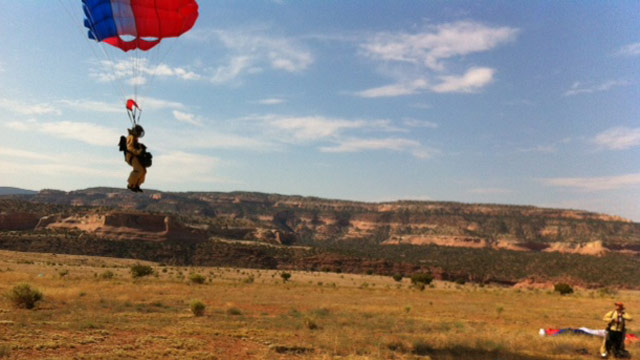 It's another hot day in Grand Junction, Colorado, which means another busy day for smoke jumpers who are stationed here to help put out fires in the wilderness. These men and women are not your typical fire fighting team. They parachute into hot spots to cut off the fuel that fires need to burn. There are just over 400 smoke jumpers in the United States trained to combat wildfires that way.

They typically jump from 3,000 feet in the air, landing in remote areas to cut down trees with chain saws, dig trenches and fight fire with fire, setting controlled burns to help stop flames from spreading. Special tools, parachutes, suits and helmets help them strategically battle the blaze.

They work in difficult and dangerous terrain. After the mission is done, they have to hike their way out with about 150-pound packs strapped to their backs.