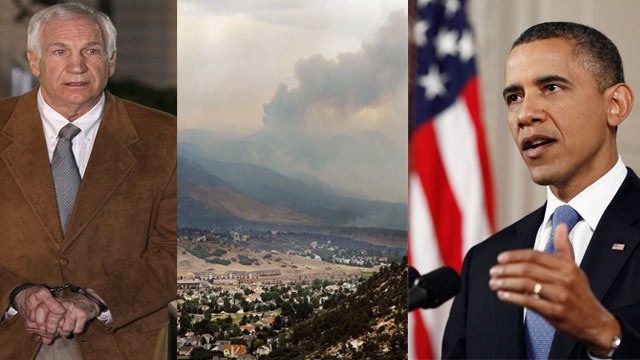 On Monday, the Supreme Court struck down most of Arizona’s controversial immigration law, but upheld a key piece that allows state police to check the immigration status of anyone they stop and suspect of being in the U.S. illegally. Now the spotlight is on the presidential candidates' policies on immigration, with voters asking what they think of the ruling. While some believe Mitt Romney isn’t being specific enough, CNN’s John King says Romney is giving more policy details than others running for office in the past.

Former Penn State Assistant Football Coach Jerry Sandusky was found guilty on 45 out of 48 counts related to child sex abuse. It was an emotional case with horrific stories recounted by victims on the witness stand. Their testimony painted a picture of a man who targeted disadvantaged young boys without fathers. Two jurors spoke to Anderson after the trial about what they witnessed in the courtroom and how they came to their decision. Joshua Harper found Sandusky’s expressions “creepy” while the witnesses were on the stand. “It seemed to be he was kind of reminiscing of the victims…he would kind of lean in towards them…like he was thinking about the victims and his behavior with them,” said the juror.

Approximately 7,600 people were sterilized as part of a eugenics program from 1929 to 1974 in North Carolina. Victims were potentially going to receive compensation, but state senators rejected the plan, saying the budget is too tight to include the estimated cost of $10 million. One woman who was sterilized after she was raped in her teens says she is “crushed” by the legislators’ decision.

At least 140 people were killed in Syria on Thursday, according to a Syrian opposition group. Earlier this week, at least seven people were killed by bombers at a pro-regime Syrian satellite channel, according to the Syrian government. This violence follows an incident last week that involved a Syrian missile downing a Turkish military jet. Turkey also says Syria fired on a second jet that was part of the operation to find the pilots who were in the first jet. CNN’s Ivan Watson reports on the growing tensions between the two countries.

The Supreme Court upheld the controversial health care law known as Obamacare. The 5-4 ruling was a huge win for President Obama. “Today’s decision was a victory for people all over this country whose lives are more secure because of this law,” he said. The court decided the individual mandate provision was constitutional and valid as a tax. CNN’s John King will talk with Ari Fleischer, Paul Begala, David Gergen, Gloria Borger, Jeffrey Toobin, Sanjay Gupta, and a Romney surrogate tonight. Former Attorney General Alberto Gonzales also joins us to talk about Chief Justice John Roberts siding with his liberal colleagues. Tune in at 8 and 10 p.m. ET.

More than 36,000 people have been forced to evacuate their homes as massive wildfires in Colorado continue to burn. One woman tells us how she had to suddenly evacuate with her young son after smoke filled her apartment. “The smell was awful, choking,” she said. CNN’s Rob Marciano has an update on the situation tonight.

The countdown of the top five RidicuLists of the year so far continues through Monday. Stay tuned - maybe your favorite will be on the list!

CNN’s Drew Griffin is investigating where money donated to charities is going. He discovered a few organizations that aren’t using the bulk of the funds to directly help disabled veterans and animals, respectively, as they promise. Watch a special report on Tuesday at 8 and 10 p.m. ET.

Surveillance video caught one man trying to rob the same gas station over and over again, but it wasn’t money he was after. Find out why the thief and his sweet tooth land on our RidicuList!