George Zimmerman, the man who killed Trayvon Martin, is heading back to jail. The prosecution accuses Zimmerman and his wife of lying about how much money they had when bail was set. 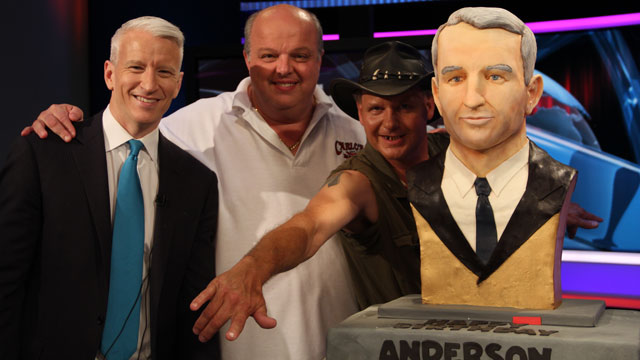 It’s tough for our staff to surprise Anderson for his birthday. First, he knows it’s coming. And, he’s traveled the world, met the most fascinating people and lives a pretty exciting life.

We had to beat last year’s dog and pony show. One idea jumped out at us: Turtleman. And Cake Boss. Together. Check out a few behind-the-scenes pictures and come back to the blog for more on Monday!

See what happened during the show when Ernie and Mauro delivered their birthday gifts. After you watch, wish Anderson a Happy Birthday on twitter @AndersonCooper!

Turtleman with his 30 lbs. snapper turtle.

Mauro and Turtleman comparing their ink before the show.

Mauro from "Cake Boss" presents his masterpiece - a cake that looks like Anderson.

The Turtleman plants one on his snapper turtle.

The Turtleman shows off his tattoo.

Anderson Cooper is surprised on his birthday by the stars of Animal Planet's "Call of the Wildman" and TLC's "Cake Boss."

Reporter's Note: President Obama has a job until at least next January, but then…depending on the unemployment rate, he too could be out of work. Who knows? In the meantime, I write a letter to him every day.

I think I’m going to dig a bunker in the back yard and crawl in each month when the jobs report comes in, because you just never know when it is going to be a bombshell. These numbers today are just lousy.

But I guess I don’t have to tell you that. I’m pretty sure you have a crack team of number crunchers down there who were screaming and breaking their pencils all morning over this news. As I understand it, economists thought the nation would pick up about 150,000 jobs in the month, and we came up with a whopping 69,000 instead. That’s not even vaguely close enough to keep up with the number of younger folks entering the workforce, so the unemployment rate cranked up a bit too.

You make a fair case that Europe’s troubles are part of the problem. After all, they are rumbling through some financial and political earthquakes over there that might make us run en masse into the ocean. However, in terms of practical politics, there is just no way any sitting president…Democratic or Republican…can escape some very hard questions in circumstances like these. To wit: What did you do to improve the economy? Why did it not work better? And what will you do next?

I realize that you have answered those questions before, but trust me, you are going to have to answer them again, and again, and again if you want to win this election…or at least once a month when the jobs numbers come out.

Good luck with that. Meanwhile, I’ll be in my bunker.

Tonight on AC360: "We should be ashamed" of treatment of Pakistani Doc

Last week, a Pakistani tribal court sentenced Shakeel Afridi to 33 years in prison for treason. At the time, Pakistani officials said it was because Afridi helped the CIA track down Osama bin Laden. He had set up a fake vaccination program in hopes of getting DNA samples to identify the al Qaeda leader. But there's a new twist tonight. They now say the conviction was due to Afridi's "close links" to the militant group Lashkar-e-Islam, according to the judgment obtained by CNN.

Tonight on 360°, Anderson talks in-depth with U.S. Congressman Dana Rohrabacher, who says the U.S. should be "ashamed" of Afridi's treatment in Pakistan. The California Republican says the U.S. should be "raising holy hell" to help Afridi. "He risked his life for us and we're abandoning him," Rohrabacher said. Here's a preview of the interview and see more tonight at 8 and 10pm ET..

A judge upheld safety violations against SeaWorld and said there should be better measures, like physical barriers, to protect trainers. Jack Hanna and David Kirby debate the treatment of killer whales in captivity.