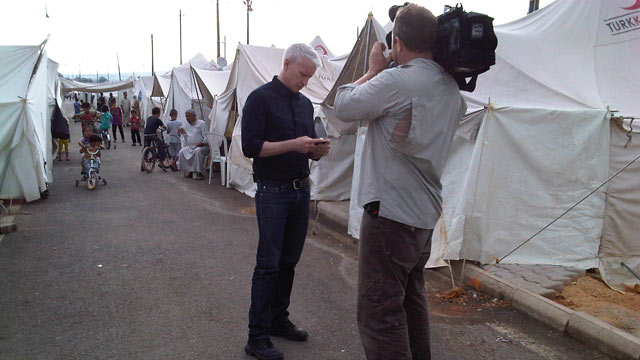 Anderson Cooper traveled to a refugee camp in Turkey to speak with Syrians who escaped the violence.
May 12th, 2012
07:08 PM ET

Why we’re going to the border of Syria and Turkey

On Friday night after AC360° aired, Anderson and team embarked on a nearly 28 hour trip (including two plane rides, layovers and a three hour drive) that took us from New York City to the eastern border of Turkey.

Where are we going?  The eastern part of Turkey borders Syria.  Believe me, we would love to actually go into Syria and report what’s happening in the country. However, despite Bashar al-Assad’s regime’s claims that journalists are free to report from the country, our visa applications have disappeared into the Syrian embassy in Washington with no word on if we are approved, denied, or even when a decision would be made.

So we will stick to the Turkey side of the border, which holds a piece of the conflict the world should see.  Nearly 25,000 Syrians have fled across the border into Turkey since the uprising in Syria began last March.  Turkey, which maintains an open border policy with Syria, has set up numerous camps close to the border for the refugees that have been steadily streaming in to escape the violence.

We have heard stories of families who fled their homes, mostly on foot, to escape the relentless shelling of cities like Homs, Aleppo, Jisr al Shughur.  We’ve heard stories of parents who have lost sons, wives who have lost husbands, ordinary citizens who have lost not only their homes but their beloved country as well. We’ve heard their stories, but we haven’t met the victims ourselves, so we will spend the weekend visiting the camps and speaking with some of these refugees. We will tell the world their stories on Monday night when we broadcast live at 8pm ET on CNN.

Reporter's Note: I write a lot of letters to the president.

After your big dinner with George Clooney this week, and some of Mitt Romney’s fundraising activities, I find myself once again pondering the state of campaign fundraising. To wit: How can either one of you keep talking about how much you understand working folks, want to be in touch with us, and represent us, while you are simultaneously locking yourself away in a room full of fat cats who pay to spend time with you?

Seems to me that anyone who wants to be President ought to send a clear message that he or she is going to be a leader for all Americans, and the first step should be making all events...except those that involve the direct security of the United States…public events.
I can’t imagine all these multi-thousand dollar a plate dinners would ruined if TV cameras were allowed to sit in the corner and record the action live for the rest of the nation. I promise we would not spill anyone’s soup. And if you and Mr. Romney really think allowing the rest of us to see what you are up to with your big donors is a problem…well, doesn’t that just suggest something shady is going on?

Some of your supporters used to come practically unhinged over the idea that President Bush met with business leaders in private where the public could not monitor what was said. (Especially if it was oil people!) I know some Republicans were apoplectic whenever you chatted with health care folks in private.

So why don’t you reach out to Romney and bring some of that transparency to the table that you both say you prize so much? Go ahead and raise your money, but like I said, make every single fundraising event from now until the election a public one. If nothing else it will help reduce the impression that you are both allowing the rich, famous, and influential to buy access to you that the rest of us can’t afford. And no, a few stunts in which the two of you eat hamburgers with three or four ‘regular’ folks does not solve the problem.

If not…well, maybe then presidents, Democratic and Republican, should just go ahead and charge admission to the Oval Office.

Not trying to be a troublemaker, but come on…if you and Romney are not saying things with the fat cats you don’t want us to hear, then why don’t you fling the doors open and invite the rest of America in to grab a plate?