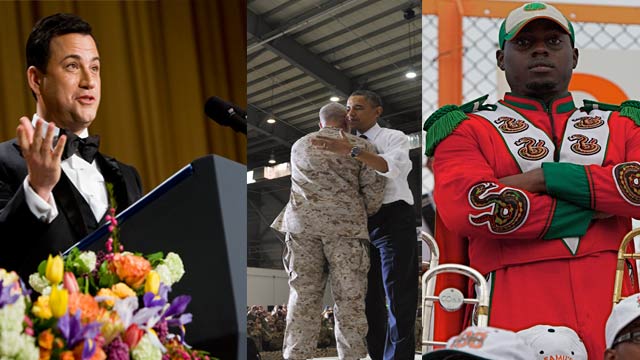 In an unnanounced visit, President Barack Obama traveled to Afghanistan on the first anniversary of the death of Osama bin Laden. The President gave the first TV address to the nation from a war zone on foreign soil, according to the White House. The president announced that he signed an agreement with Afghan president Hamid Karzai outlining cooperation between the two countries once U.S. troops withdraw at the end of 2014. Peter Bergen called the agreement an “important milestone.” CNN’s Fran Townsend and retired Maj. Gen. James Spider Marks weighed in on the conversation and discussed the ability to trust Afghan security forces: “We have no other choice, we need to have confidence in what they can achieve,” said Maj. Gen. Marks. Obama’s trip was his third to Afghanistan since taking office. Shortly after he left the country, a car bomb in Kabul killed at least seven people and wounded 17 others.

Also in the wake of the first anniversary of Osama bin Laden’s death, a political war of words broke out between President Obama and Republican frontrunner Mitt Romney – We’re Keeping Them Honest.

Last year AC360 covered the suspected hazing death of Robert Champion, 26, a drum major at Florida A&M University. Anderson looked into whether university officials ignore the culture of hazing. Today, criminal charges were filed against 13 people in Orlando. Anderson will talk to Champion’s mother and the family’s lawyer tonight about the case.

Former NFL linebacker Junior Seau, 43, died from an apparent self-inflicted gunshot wound to his chest, according to police. He was discovered in his Oceanside, CA home. Anderson and Dr. Sanjay Gupta will discuss the circumstances of his death and the possible brain-related injuries linking suicidal athletes.

While many U.S. attorneys general, legislators, religious leaders, and more than 50 NGO's have called on Backpage.com to shut down its adult services section, the website still defends the adult classified ads placed on its site. CNN’s Deborah Feyerick talks to the mothers of teen victims who have been advertised by pimps.

Jimmy Kimmel’s jokes at the White House Correspondents’ Dinner were a hit with President Obama and the rest of the room. Kimmel spoke with Anderson about the tough crowd and told him the jokes that didn’t make the speech. But the biggest joke seemed to be on Kimmel himself – his theory on Anderson’s giggle landed him on the RidicuList!