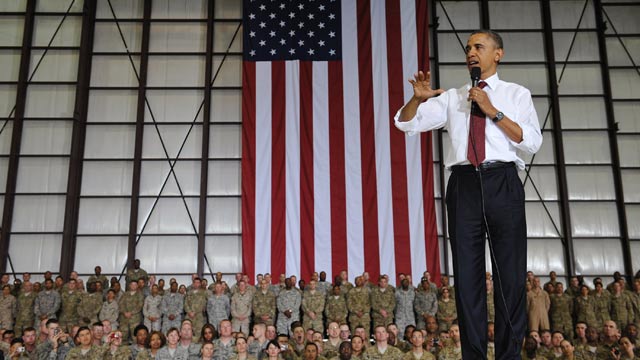 Tonight on AC360: The President addresses the nation from Afghanistan

One year ago terror mastermind Osama bin Laden was killed by U.S. Navy SEALs during a raid on his Pakistan compound. Today in neighboring Afghanistan, President Obama signed the Strategic Partnership Agreement between the two countries during an unannounced visit. The agreement outlines cooperation between the U.S. and Afghanistan for the ten years following the 2014 withdrawal of most U.S. and allied troops.

The President also spoke to troops at Bagram Air Force Base outside of Kabul before shaking hands with service members. "You guys represent what is best in America," he said. "I know the battle is not yet over. There is going to be heartbreak and pain and difficulty ahead. But there is a light on the horizon because of the sacrifices you've made. You've earned a special place in our hearts and I could not be prouder to be your commander in chief."

The U.S. has 90,000 troops serving among the 130,000 troops from 50 countries, according to the NATO-led International Security and Assistance Force. Since the war began in 2001, more than 2,700 coalition troops have died, the majority of them American.

Support for the war in Afghanistan has fallen to an all-time low, and a majority of Americans believe the U.S. should withdraw all of its troops from Afghanistan before the 2014 deadline. The CNN/ORC International poll conducted in late March shows 25% of respondents support the war while 72% oppose it.

Today's trip marks President Obama's third to Afghanistan. Six months from now, Americans will head to the polls to either reelect the President who decided to pursue the mission that took out bin Laden, or they will cast their vote for a new leader, most likely Republican candidate Mitt Romney. Regardless, the issue of national security will surely be on the minds of many voters.