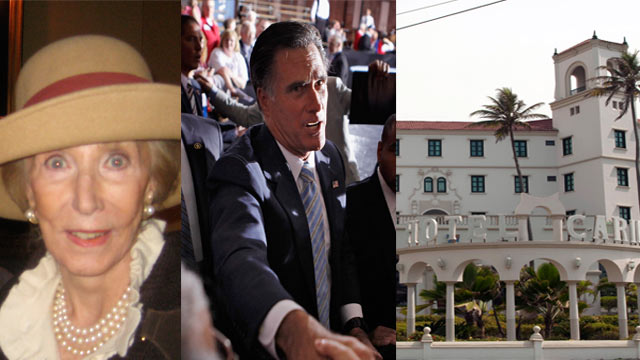 Mitt Romney won all five Republican primaries on Tuesday in Connecticut, Delaware, New York, Pennsylvania and Rhode Island. He has transitioned his campaign’s focus from the nomination to the general election against President Obama. Yet it seems the former Massachusetts Governor still needs to explain his stance on key policy issues, like illegal immigration – We’re Keeping Them Honest. CNN’s Gary Tuchman went to Mexico to meet Romney’s relatives who still live in the area where the candidate’s father was born. Some of his cousins gave their take on the border fence, talked about their family history and their desire to one day meet their famous cousin. Anderson spoke with Montana’s Democratic Gov. Brian Schweitzer who defended his controversial remarks that tied Mitt Romney’s family to the practice of polygamy. Schweitzer said that he was trying to reference Romney’s struggles to connect with Latino voters.

A total of 24 Secret Service and U.S. military personnel are now linked to the alleged secret service prostitution scandal in Cartagena, Colombia; nine members of the Secret Service have resigned or are being forced out of the agency. And it doesn’t seem this was the first mishap: there are reports that a similar scandal happened in El Salvador last year. Secret Service members allegedly paid for sexual favors and took strippers back to their hotel. But President Obama has full confidence in Secret Service Director Mark Sullivan, said Homeland Security Secretary Janet Napolitano on Wednesday. AC360° Producer Ish Estrada went to Cartagena to report the story and he says prostitution is out in the open: “…it was very aggressive. We were approached countless times by street hustlers looking to take us to brothels, or by street prostitutes who were openly walking the streets next to police.” CNN’s Drew Griffin has the full report on the culture of sex and prostitution in Cartagena.

Even though a small group of United Nations observers resumed its mission to monitor a cease-fire in Syria, at least 70 people were killed by a military rocket attack in Hama on Wednesday, according to activists. The strike, one of the deadliest in the ongoing Syrian crisis, prompted the Syrian opposition to call on the U.N. Security Council to hold an emergency meeting. There are questions on whether the U.N. mission is effectively stopping the violence against civilians – We’re Keeping them Honest. And Anderson spoke with Sen. John McCain who says the U.N. mission is useless and criticizes President Obama for “doing nothing” to end the violence.

Viola Drath’s husband, Albrecht Muth, is accused of murdering the D.C. socialite. But that’s just where the story begins. Muth, over 40 years younger than his wife, described himself as an Iraqi army general, walked around their Georgetown neighborhood dressed in full military attire, and told friends of his connections to the United Nations. But are any of these assertions true? Muth was indicted for first degree murder, but may not be competent to stand trial. CNN’s Tom Foreman reports.

The first U.S. case of mad cow disease in six years was confirmed in a cow tested in California. Only 40,000 cattle are tested in the U.S. each year; that had us asking: Is that enough? We’re Keeping Them Honest. Anderson spoke with Dr. Sanjay Gupta about mad cow disease detection; and Consumer Union’s Elisa Odabashian who says that companies want to do their own testing but the USDA will not allow it.

And the man who thought he could be Charles Manson’s son is left wondering about his biological father after DNA tests prove he is not related to the convicted mass murderer.

The father of a 10-year-old autistic boy, Stuart Chaifetz, put a wire on his son Akian after the boy’s school’s staff repeatedly complained the child was hitting them. The results shocked him. He says the recording caught staff teasing his child and talking about alcohol and their hangovers. At one point, one member of Horace Mann Elementary School in Cherry Hill, NJ told the child: “Go ahead and scream, but guess what? You're going to get nothing…until your mouth is shut." Anderson will speak with Chaifetz tonight at 8 and 10 p.m. ET.

A former aide to John Edwards faced more questions on Thursday after he was cross-examined about his motives on Wednesday. Andrew Young testified on Tuesday that he helped cover up Edwards’ affair while Edwards’ wife was in the hospital getting treated for cancer. Anderson reviewed the surprising accusations and claims of how Edwards’ mistress was paid and the cost of his affair. Watch AC360° tonight for more of the explosive testimony.

Newt Gingrich will officially end his bid for the presidential nomination next week and formally express his support for Mitt Romney, his spokesman said on Wednesday. Our political team will be standing by for the announcement.

It sounds like a beginning to a great joke: three guys walk (read: break) into Sea World, swim with some dolphins, and then…steal a penguin? They’ve waddled their way onto on our RidicuList!