The race between President Obama and Mitt Romney goes to the dogs... and a plastic surgeon. Only on the RidicuList.

Without a grand jury, Florida state prosecutor Angela Corey determined the second-degree murder charge for Trayvon Martin shooter George Zimmerman. Some believe this is another instance of Corey zealously overcharging as she has done in the past .

CNN's Gary Tuchman looks at another controversial case involving Corey and charges she issued against a 12-year-old boy. Cristian Fernandez is being tried as an adult on a first-degree murder charge for the death of his 2-year-old brother. He's the youngest person in Florida to be charged as an adult for murder.

When first imprisoned, he was placed in solitary confinement in an adult jail before a judge agreed to move him to a juvenile facility. If convicted, he will be sentenced to life in prison without parole.

When asked about the decision, Corey said, "We want the public to understand at this point we have no choice" She also believes it's necessary to be tough to prevent a future murder. Others disagree, like the man who held Corey's title before her and used to be her boss. "I clearly think the decision was a travesty," said Harry Shorstein.

Fernandez's mother is also implicated in the crime; she pleaded guilty to aggravated manslaughter. The 12-year-old's traumatic family life includes an abusive stepfather who committed suicide. Watch Gary Tuchman's report for more on the circumstances of the case, and why Corey would like to reach a plea bargain.

Anderson Cooper takes a look back at the life of The Band's Levon Helm and his many contributions to music.

Investigators search for Etan Patz a block from his apartment. Erin Runnion says crimes can happen very close to home.

Amid new clues in the disappearance of Etan Patz, CNN's Tom Foreman looks back at the decades-old case.

Letters to the President #1186: 'We've got trouble...right here in river city'

Reporter's Note: President Obama has had a few extra items on his desk lately; items which, I’m guessing, he’d rather not be dealing with. Thank goodness my daily letter is also there to distract him.

I have not really said anything here about the mess with the Secret Service agents during that whole southern swing, but I guess I ought to share a few of my thoughts. Or maybe not. I imagine you’ve heard more than you were wished to hear on the subject already.

And yet, I wonder if you’d better be prepared to hear a good deal more, because I’m pretty sure your opponents are delighted with the series of scandals that have been buzzing near you lately. The whole Vegas retreat thing, the hookers, some of this stuff about Panetta flying around on the taxpayer dime…you get the picture.

This is not so much an issue of blame, as it is of proximity. I think most reasonable Americans realize that no president, whether he is Democratic or Republican, can not necessarily be held responsible for everything done by everybody on his team. The federal government is, after all, a pretty big organization and not everyone traipses into the Oval Office to report their plans each morning. If that were the case, you would have raised a few questions when, oh say, some guy blurted out, “Then after the late meeting, we’re thinking of picking up some prostitutes…”

Still, just being close to such problems, as any president necessarily is, presents challenges. It’s kind of like it was back in school when you wound up seated at the bad kids’ table; it didn’t matter whether you were making trouble or not, if they were busted…so were you. And of course it is all a huge distraction from your actual business.

My only advice is to brace yourself, be patient, wait for the storms to pass, and…oh…one more thing…don’t be surprised if more comes your way. Sometimes that’s just how it works out.

The lawyer for Trayvon Martin's family says they will not agree to meet with George Zimmerman privately as he requested. 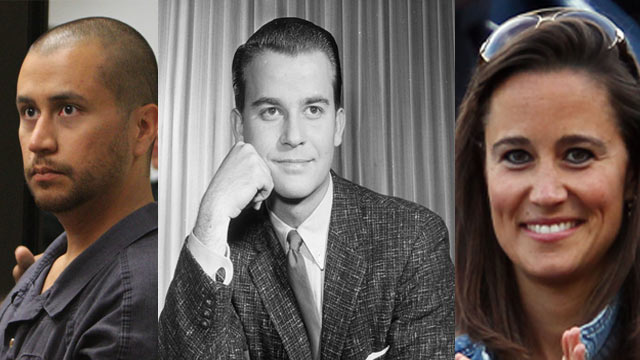