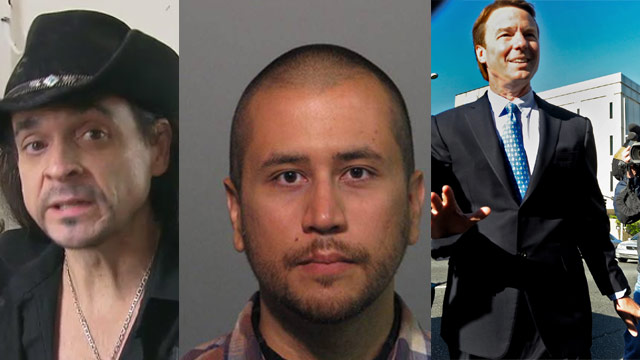 George Zimmerman, the neighborhood watch volunteer who says he shot 17-year-old Trayvon Martin in self-defense, was charged with second degree murder, a special prosecutor announced on Wednesday. He was taken to the Seminole County Jail hours later. Two lawyers who had been giving legal advice to George Zimmerman told reporters on Tuesday that they lost contact with their client and no longer represented him. Craig Sonner and Hal Uhrig spoke exclusively with Anderson about why they withdrew their counsel and defended their comment that their former client is “probably suffering from post-traumatic stress.” But our legal panel took exception with the lawyers’ statements. Attorney Mark Geragos, who compared the lawyers’ statements to a SNL skit, said Zimmerman’s lawyers are the “height of absurdity.” Now Zimmerman has a new lawyer who was described by our legal analyst as “very smart.”

Notorious killer, Charles Manson, 77, was denied parole on Wednesday in a hearing at a prison in Corcoran, CA where he is serving a life sentence. Manson did not show up to his parole hearing and the next one is scheduled for 15 years from now. CNN’s Miguel Marquez spoke to one man who believes he may be Manson’s son. "It's more than just possible, but probable," Matthew Roberts, 44, told Marquez. Contaminated DNA tests have failed to confirm if Manson is his father.

Legendary journalist Mike Wallace died at the age of 93. Anderson and Wallace’s “60 Minutes” colleague Lesley Stahl shared their personal memories and discussed his competitive drive, and his courage to publicly speak out on his depression.

Republican presidential candidate Rick Santorum suspended his campaign on Tuesday. The announcement came after a family emergency; his three-year-old daughter Bella was hospitalized over the weekend. His decision marks the beginning of the general election race between Mitt Romney and President Obama, although Romney hasn't officially clinched the nomination yet. Newt Gingrich and Ron Paul said they intend to continue their campaigns until the convention in August.

At least 21 people were killed in Syria on Thursday, according to the Local Coordination Committees. The bloodshed occurred despite the Syrian regime’s announcement it will abide by the U.N.-backed 6-point-peace-plan starting on Thursday. We’re Keeping them Honest and will continue to monitor the story. Syria’s Foreign Minister Jihad Makdissi, told CNN: “We are fully committed to have a successful mission for Mr. Annan, but at the same time people should know that I can say optimistically that 40% of the keys to solve the crisis is in our hands as government but the other 60% is in the hands of those who are harboring, channeling weapons, instigating in the media against Syria.” After paying a visit to refugee camps housing Syrian citizens in Turkey on Tuesday, Senators John McCain and Joseph Lieberman told Anderson the U.S. has a moral obligation to stop al-Assad’s attacks and to aid the opposition without U.S. military boots on the ground.

After George Zimmerman was charged with second degree murder, he appeared before a judge in Seminole County, FL on Thursday. He spoke a few words before his arraignment was set for May 29. Anderson will talk with Trayvon Martin’s family and their attorney tonight for their thoughts on the case and upcoming trial. Tune in at 8 and 10 p.m. ET.

Democratic Strategist Hilary Rosen made a controversial comment on AC360 Wed. about what she claimed is Ann Romney’s inability to understand the challenges of raising a family and working at the same time. The remark sparked a debate on Twitter and many political heavyweights, from both sides of the aisle, reacted. Rosen offered an apology and she’ll be back on AC360 tonight to talk about the fallout.

CNN’s Soledad O’Brien looks into the case of Kenneth Chamberlain, a 68-year-old veteran, who was shot by police officers who arrived at his home after he triggered a medical alert device asking for help. Watch AC360 tonight for the details and questions surrounding the incident.

We’re following developments in the trial of former U.S. Senator and former presidential hopeful John Edwards. Jury selection for the case began today and opening statements could start in a few weeks. Edwards is charged with six felony and misdemeanor counts alleging he used campaign contributions to hide his pregnant mistress from his wife and the public during his 2008 presidential run.

Anderson puts himself on the RidicuList again after an uncontrollable case of the giggles. The laughing fit happened while he was adding “Everyone who missed Dyngus Day” to the RidicuList on Tuesday. The video grabbed everyone’s attention – even the Buffalo founder of Dyngus Day, who offered to make Anderson next year’s Pussy Willow Prince!