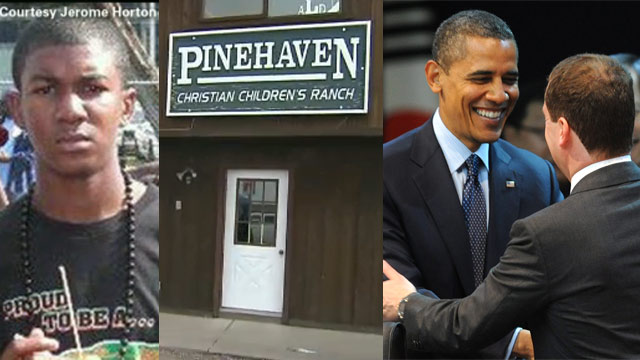 Last night Anderson spoke with Trayvon Martin’s parents about the teen’s school records being released and their search for justice. They say their son was defending himself in the confrontation with neighborhood watch captain George Zimmerman. However, an eyewitness says he saw Zimmerman yell for help during the scuffle – We’re Keeping the Honest. Supporters of both Martin and Zimmerman are speaking out with competing views of what happened the night of the shooting. Among those inserting themselves in the spotlight is a group called The New Black Panthers. They are offering a $10,000 reward for the arrest of Zimmerman. Trayvon’s family doesn’t approve of the bounty, says one of the lawyers representing the family. And as the U.S. Attorney’s Office and the FBI have launched investigations into the shooting, the local Sanford, Florida Police Department has come under scrutiny. Sanford’s mayor voted no confidence in the city’s police chief.

At least 26 people were killed, including two military defectors, in Syria on Wednesday as the government continued its deadly crackdown across the country, according to Syrian activists. This comes after President Bashar al-Assad agreed to a U.N.-backed six-point peace plan on Tuesday that calls for a commitment to end the ongoing violence against civilians. The Syrian president even paid a visit to the embattled neighborhood of Baba Amr in Homs on Tuesday. This is the same neighborhood where Journalist Marie Colvin was killed in an attack by Assad’s forces in February. However, many question whether the humanitarian crisis will improve. Anderson spoke to an activist who doesn’t believe anything the government says. He said, “If the government says good morning, I believe it is evening… they lie even if you ask them their names.”

President Obama’s remarks on missile defense were caught on an open mic when he was speaking with Russia’s President Dmitry Medvedev on Monday. Obama told Medvedev: “..after my election I have more flexibility.” Republicans, including Presidential Candidate Mitt Romney, quickly pounced on the president for underestimating what they call the Russian threat. Anderson spoke with Former George W. Bush Press Secretary Ari Fleischer and Obama 2012 Deputy Campaign Manager Stephanie Cutter about the remarks.

Tonight, Anderson talks with Senator John McCain about the violence in Syria, the U.S. Supreme Court’s review of President Obama’s health care law and what he thinks the president’s comment to Medvedev meant. Watch at 8 and 10 p.m. ET. It’ll be a conversation you won’t want to miss!

We’ve aim to report on the Trayvon Martin investigation from every angle. Tonight new video of George Zimmerman as he was led into the Sanford, Florida police department, in handcuffs, the night Trayvon Martin was killed.

In yesterday’s installment of our “Ungodly Discipline” series, AC360's Gary Tuchman spoke with former employees and students from the Pinehaven Christian Children's Ranch in western Montana. Operators of the school don’t dispute their use of "tough love" techniques, but they deny allegations of abuse. Tonight we look at the lack of state oversight of the school.

Tune in tomorrow for part 3 of our report of Ungodly Discipline. Gary Tuchman tells the story of one family whose daughter was sent to Pinehaven by a truant officer in their Ilinois town. And it’s not the first time that officer has sent teens to Pinehaven.

We’ve been working on a year-long investigative study that looks at the taboo issue of race relations and children. In a behind-the-scenes preview of “Kids on Race: The Hidden Picture,” Anderson describes the special report which will air the week of April 2 at 8 and 10 p.m. ET.

Has it been a while since you last got pulled over while driving? If you’re Batman, the answer is no. Find out why the superhero drove his Batmobile onto the RidicuList!