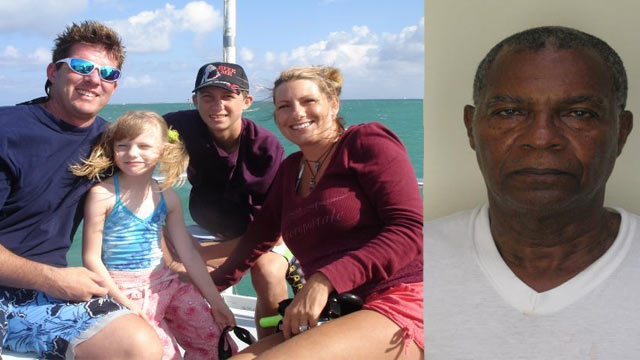 Just minutes after we pulled up for our interview with Kanina James, the tears began to flow. We found her sitting on the front porch, alone, and still in pain.

It’s been a year and a half or so since her husband of 13 years was shot dead by a 71-year-old retired bus driver. The shooter, Trevor Dooley, says he shot 41-year-old David James because he thought James was going to kill him. He’s using a statute in Florida known as the Stand Your Ground law to try and get the charges against him dropped.

It all started on a neighborhood basketball court in a suburb of Tampa. The two men got into an altercation over a teenager skateboarding on the court. Dooley was shouting at the teenager to get off the court, and James intervened. After a struggle, Dooley shot James once in the heart. He died in front of his 8-year-old daughter. Kanina James told me she’s worried about her daughter because she doesn’t want to talk about that day and keeps it all bundled inside. She’s seeing a therapist but it’s not really working. Kanina James believes the Stand Your Ground law is like a free pass to murder.

I hope you’ll tune in tonight for AC360° at 8 and 10 p.m. ET for this emotional interview; you can decide who you think was the aggressor in this case and if Trevor Dooley should stand trial. Share your thoughts with me on Twitter @RandiKayeCNN