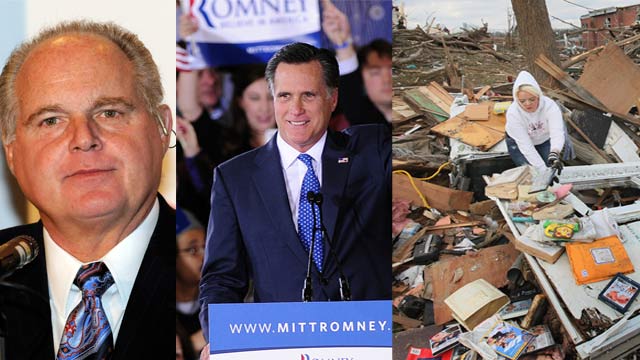 The races on Super Tuesday left Mitt Romney with 429 delegates, compared to 169 for Rick Santorum, 118 for Newt Gingrich, and 67 for Ron Paul, according to CNN’s latest delegate count. The former Massachusetts governor won in Alaska, Idaho, Massachusetts, Virginia, Vermont and Ohio – for the full results, go to CNN Election Center. CNN Political Analysts discussed a challenge for the former Massachusetts governor: beating rivals in cities where he most likely can’t win in the general election And AC360 political producer, Rebecca Sinderbrand, writes that Ohio exit polls hint at trouble for Romney should he become the Republican nominee in the fall. Also, in an impromptu appearance on CNN while voting in the Alaska caucuses, Sarah Palin said she wouldn’t close the door on running for president if nominated at the Republican convention.

While Rush Limbaugh apologized to Georgetown Law Student Sandra Fluke last Saturday, he mischaracterized her testimony on birth control coverage – We’re Keeping Them Honest. Anderson spoke with David Axelrod, senior strategist to the Obama 2012 campaign, about the candidates’ responses to Limbaugh’s comments, and the upcoming election.

Defense Secretary Leon Panetta said the pressure is mounting on Syria when he appeared before the Senate Armed Services Committee today. His testimony comes after at least 39 people were killed in Syria on Tuesday, according to opposition activists. In a riveting interview, Anderson spoke with Paul Conroy, a British photojournalist, who called the situation in Homs a “medieval siege and slaughter.” Conroy was injured in the same attack that killed his friends and colleagues Marie Colvin and Remi Ochlik. Also, Anderson spoke with Danny, a Syrian activist accused by the Syrian regime of distorting reality in Homs. Danny said his videos show the horrific violence there, not a manipulation of the truth.

A student was shot and killed earlier this year as she was driving home in Texas. CNN’s Drew Griffin reports on the mysterious assassination-style killing of an Iranian dissident in the U.S.

Deadly tornadoes ripped through the U.S. last week, leaving a trail of destroyed homes and towns. WDRB Reporter Lawrence Smith described what it was like being trapped in Henryville, Indiana.

Yesterday, Anderson asked Sen. John McCain about his push for the U.S. to use military force to stop the Assad regime’s slaughter and help the victims in Syria. Sen. McCain also commented on the possibility of Sarah Palin receiving a nomination for president at the GOP convention.

CNN’s Elizabeth Cohen recently told you about efforts in North Carolina to compensate people who were forcibly sterilized by the state decades ago. But the most egregious state—California—which performed 20,000 sterilizations, has taken no steps to compensate victims– We’re Keeping Them Honest tonight at 8 and 9 p.m. ET.

On Friday, don't miss part two of Elizabeth's report on California’s eugenics program as she attempts to seek answers from state leaders.

It’s been almost one year since the catastrophic earthquake and tsunami hit Japan, and amidst the reconstruction, youth volunteerism sees a spike.