Washington (CNN) - Toyota engineers found an electronic software problem that caused "sudden unintended acceleration" in a test vehicle during pre-production trials, according to a company engineering document obtained by and translated for CNN.

The 2006 document, marked "confidential," recounted the results of an adaptive cruise-control software test in a model internally designated the 250L, a vehicle later sold as the Lexus 460 in Japan and Europe. The document says a "fail-safe overhaul" would be needed for another model in production, internally designated the 180L, which the company says was later sold as a Toyota Tundra.

Toyota insists that the document shows no such thing, and it continues to deny that any sudden unintended acceleration in any of its vehicles was caused by electronic systems. But three translations of the report, including two commissioned by CNN after Toyota's objections, found that engineers raised concerns that the adaptive cruise control system would start the car moving forward on its own.

"The cruise control activates by itself at full throttle when the accelerator pedal position sensor is abnormal," states the document, written in Japanese, translated into English.

Video: RidicuList: The dangers of laughter

Video: The Shot: Toddler and dog 'play' the blues

A child plays the harmonica and a dog howls along in this edition of "The Shot" for AC 360 °.

Video: Activist: Assad will have to kill us all

A Syrian activist named "Danny" has posted videos on YouTube of the attacks for months. In an exclusive in person interview, he tells Anderson Cooper that the fighting will not stop until either Assad is gone or the activists are all dead.

Javier Espinosa survived the shelling that killed Marie Colvin and Remi Ochlik. He describes the attacks he experienced before his escape.

The Free Syrian forces left Baba Amr with about 4,000 residents there trying to survive attacks and harsh conditions. 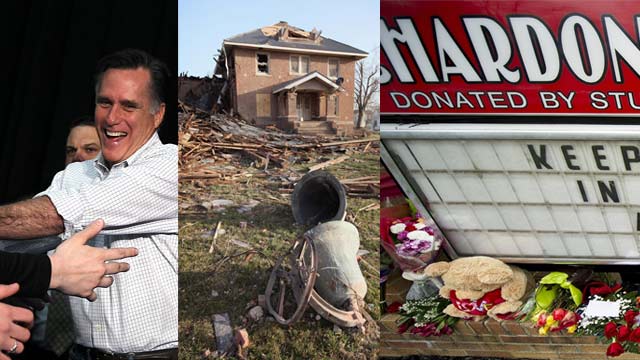 T.J. Lane, 17, was charged on Thursday afternoon with six counts, including aggravated murder. in juvenile court after he admitted to bringing a .22 caliber gun and a knife to Chardon High school in Ohio on Monday. He allegedly fired 10 rounds in the cafeteria, said Geauga County Prosecutor David Joyce. The shooting left three students dead and two others wounded; the 911 call was released shortly after. On Monday Anderson spoke to one of the victims, Nate Mueller, who was grazed by a bullet before escaping the gunfire. And in an emotional conversation, Dina Parmertor, mother of one of the teens killed, tells Anderson how her son Danny’s death has left her heartbroken. As a symbolic gesture, she and her husband will place her son’s first paycheck in his coffin because he was so excited about getting his first job.

In the race for the Republican presidential nomination, Mitt Romney won the Arizona primary and the Wyoming caucuses. While the former Massachusetts governor won the popular vote in the Michigan primary, with 41% to Rick Santorum's 38%, he will split the Michigan delegates with Santorum. They will each receive 15. Also in politics, GOP Presidential candidate Rick Santorum made some controversial comments about President’s Obama’s push for Americans to go to college or receive job training – We’re Keeping Them Honest.

Earlier this week Syrian government praised their new constitution, while violence was taking place throughout the country – especially in the city of Homs, where Journalist Marie Colvin was killed last week. Anderson spoke with Colvin’s family about her commitment to human rights and their hopes of giving her a proper burial in the United States.

END_OF_DOCUMENT_TOKEN_TO_BE_REPLACED

Letters to the President #1137: 'Government that works'

Reporter's Note: I have written another letter to the president. He will not respond. He never does.

My father was a hard worker and an honest man who earned every dollar he ever made. Subsequently, he respected the value of his money and, while generous and giving, he didn’t waste it.

So I was surprised once when he and I stopped by a rather high end store to buy a sport jacket. The salesperson was attentive, knowledgeable, and quick about his work. Nonetheless, an hour later or so when we left, the receipt for several purchases in hand, I expected my father to say something about the prices in the store. He surprised me instead by saying, “You know, I almost never spend that kind of money on clothing, but when the service and quality are that good, I don’t mind.”

Which leads me to something that I’ve been pondering lately. I think there is a growing group of moderate voters who don’t care if Democrats are running the government, or if Republicans are…they just want someone to do the job. Not talk about it. Not posture about it. Not try to score political points about it. But to do it.

I truly suspect this faction of voters is strong and growing. They are not ideologues. They see ideologues…left and right…as some of the chief troublemakers in D.C., as enemies to effective government no matter what size it may be.

A family's car sits in the garage under their collapse home. Photo credit: Joneil Adriano

Gary Tuchman talking with Gin Price. She rode out the tornado clutching her mom and two children in their bathtub. Photo credit; Joneil Adriano

Most of this home was damaged by the tornado in Harrisburg, Illinois. Photo credit: Joneil Adriano

A piece of ply wood pierced the side of a home in Harrisburg, Illinois. Photo credit: Joneil Adriano

The remains of one family's kitchen in a Harrisburg, Illinois home. Photo credit: Elisa Roupenian