A fact check on Rick Santorum's statements about the president's push for college, and religious practices of students.

Video: Ohio student: 'We were at a loss'

Student Nate Mueller shares his experience caught in the shooting at Chardon High School in Ohio. He was grazed by a bullet before escaping the gunfire.

The journalist's family is speaking out to honor her life and commitment to human rights. She died in Syria last week.

The Syrian government was praising their new constitution while deadly violence against civilians continued.

Marie Colvin's family wants her body returned from Syria so they can give her a proper burial. In this preview, she explains her message to Assad. Watch the full interview on AC360 at 8 and 10 p.m. ET tonight. 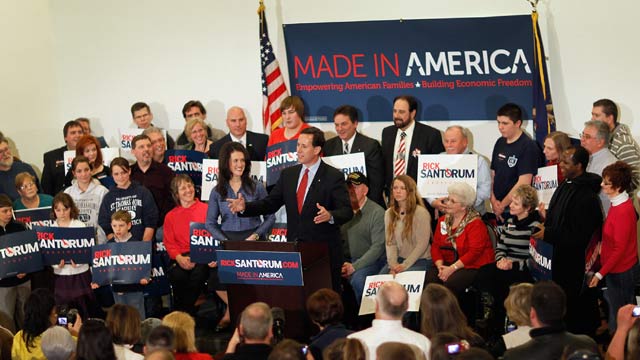 Editor's note: On the eve of the Republican primaries in Arizona and Michigan, tune in to AC360 for Raw Politics at 8 and 10 p.m. ET.

Rick Santorum is no stranger to unorthodox scheduling decisions: this is the campaign, after all, that scheduled a major economic speech for a Friday night, where news stories generally go to die. So there’s a certain sort of logic to the fact that their big home-stretch phone-banking event in Michigan - featuring some of their candidate’s highest-profile surrogates - happened to coincide with the top of the Academy Awards broadcast. (In some ways, it’s an understandable oversight: there are no visible TVs at the Troy rent-an-office currently serving as the campaign’s only official Michigan base.)

Still, there was a healthy showing yesterday. Reality show stars Jim Bob and Michelle Duggar spoke to an enthusiastic group drawn from all across the southeastern part of the state, pointing to the divine roots of Santorum’s rise as several in the family-heavy crowd nodded their agreement. “You can see the hand of God in what’s happened in this campaign,” said Jim Bob Duggar. “We have to pray that God move the hearts of the people to support Rick Santorum.” Some of the volunteers present looked eager enough to hit the streets that night.

END_OF_DOCUMENT_TOKEN_TO_BE_REPLACED

Letters to the President #1134: 'Faith and Faithlessness'

Reporter's Note: I write to the president every day. I must have faith he reads my letters, because heaven knows I’ve seen no evidence of that.

I am intrigued by the most recent dust up over “church and state” involving GOP contender Rick Santorum, because like a lot of Americans, I am often not entirely sure what a politician means when he or she addresses that phrase.

Case in point: Santorum mentioned that famous speech by Sen. John Kennedy in 1960 when he was seeking the presidency. Amid boiling questions over whether his Catholic faith would somehow give the pope power over the Oval Office, the senator form Massachusetts said “I believe in an America where the separation of church and state is absolute.”

Such a statement would seem unequivocal, and certainly the former senator from Pennsylvania, Santorum, thought of it in such terms. As such, he found it disturbing, and he may not be alone. After all, while many Americans do not want presidents to wear their faith on their sleeves, that is different than wanting our leaders to be utterly divorced from religious faith.

It is a fine line, but President Kennedy, legions of other politicians, and you have all walked it; in one breath eschewing the idea that faith might play an improper role in the public arena, and yet in the next instant asking voters to give you credit for your personal beliefs and religious convictions.

It reminds me of a old joke. A small town’s troublemaker runs into a minister on the street, who starts lecturing him about his evil ways. The bad man nods and murmurs agreement over and over, until at last the preacher concludes. “Well then, you’ve seen the errors of your life?”
“Yes,” the man replies.
“And you’ll change?”
“Yes, I shall.”
“You’ll be a better man?”
“Certainly, I will.”
“And you’ll give up drinking, womanizing, and I’ll see you in church on Sunday?”
At which point the man says, “Hold on, Reverend. You just crossed the line from preaching into meddling.”

This is where you political types live, I suspect, when it comes to religion. When you say you believe in separation of church and state, you recognize that many Americans do too…but only to a point. You want voters (especially those who are religious) to think that your decisions are informed by an over-arching set of tenets derived from years of faithful consideration and prayer, and yet you want other voters (especially those who aren’t particularly religious) to also realize that you won’t let your faith stray into the “meddling” zone.

No wonder I get confused when you all talk about faith; Democrat or Republican, liberal or conservative.

Anyway, I hope your Monday is going well. What did you think of the Oscars? I saw more movies this year than I have in quite some time, so I took an above average interest in the affair. No big surprises as far as I could tell. You?