Video: Amanpour and Ajami on Colvin, and Syria's growing war

Christiane Amanpour and Fouad Ajami, on what the world can do to help the people in Syria, and whether America will ultimately take the lead.

The great deer sausage sting. Or why you should chill, instead of stealing from the fridge. Words to live by, on The Ridiculist.

Two journalists are killed in the besieged city of Homs. The Assad regime blames the victims, and maintains the fiction that they're only targeting terrorists, not systematically murdering civilians. We're Keeping Them Honest. 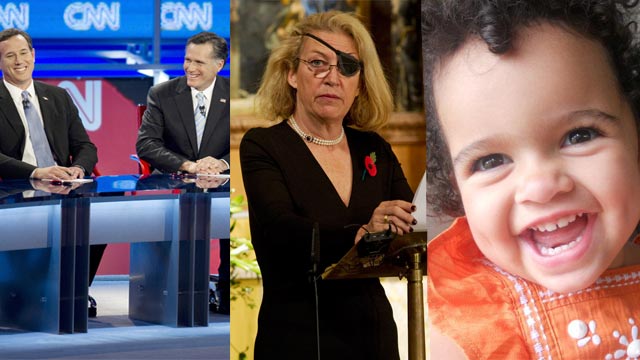 Today marks the 20th consecutive day of a deadly crackdown on the city of Homs, Syria; on Thursday across that country at least 101 people were killed, according to the opposition Local Coordination Committees of Syria (LCC). In Homs, Syrian activists, civilians and journalists continue to die under the rubble as more bombs fall and snipers line the city’s roof tops. More than 9,000 have died in Syria since the uprising started almost a year ago, according to the LCC. Children are not spared from the violence, including a toddler who gasped for his last breath next to his severely injured father. London Sunday Times’ Foreign Affairs Correspondent, Marie Colvin was in the room with the young boy. When Anderson spoke with Colvin, she said it’s the worst conflict she’s covered. Tragically, Colvin was killed shortly after the interview aired on AC360°. Beyond her work in Syria, Colvin was legendary among war journalists. Anderson paid a tribute to her and asked CNN’s Arwa Damon and Christiane Amanpour to share their experiences working with her.

For two-year-old Veronica, her adoptive parents were the only family she’d ever known. That changed when a judge ruled in favor of giving her biological father custody based on the federal Indian Child Welfare Act. Her adoptive parents are now appealing the ruling and fighting to get baby Veronica back. CNN’s Randi Kaye has the story. Children’s advocate Areva Martin weighed in on the case and talked about possible solutions.

END_OF_DOCUMENT_TOKEN_TO_BE_REPLACED

I read one of those articles this week that just makes heads spin for a lot of folks. Seems as if the head of AT&T made his board of directors somewhat unhappy by the way he handled…or rather failed to handle…that attempted takeover of T-Mobile. The whole arrangement seems sort of complicated, but it appears that because the deal did not go through and get federal approval, his company had to give T-Mobile about $4-billion dollars worth of cash and spectrum in the wireless airwaves.

And for this transgression, he was docked $2-million in pay. He still made about $22-million last year. But he didn’t get all the bonus money he was counting on.

Is it just me, or doesn’t this seem kind of crazy?

Look, I know that these are private businesses and if they want to behave as if they are completely daft, that is their right. But how is it possible that anyone considers this a punishment? Even if I were the richest human being on the planet, if someone who worked for me cost me $4-billion dollars, he would not only be fired instantly, but I would also go after him for a refund of every single dollar I paid to him during the year in question.

I mention all this, because all of you presidential types spend a lot of time hanging out with the rich and powerful (hey, let’s be honest: all that fundraising is not coming from checkout clerks at the grocery store) and I wish once in a while you would ask them about this sort of activity. Because leadership is not something that comes purely from elected officials. Leadership is something that societies must see across the spectrum; and when business leaders condone activity which seems to be so dramatically void of common sense, it undermines our sense of decency, fairness, and standards of conduct.

For crying out loud, how many regular workers do you suppose were fired in that same year for simply not working hard enough to earn their $50-thousand or $60-thousand?

Just a thought on my mind on this busy Thursday.

Anderson Cooper honors Marie Colvin, who was killed in Syria, for risking her life to give voice to people's suffering.

Presidential candidate Rick Santorum talks about his performance in the Arizona Republican debate.

Political analysts David Gergen and Erick Erickson provide their opinions on who was the winner of the Arizona debate.