Just back from Syria, CNN's Arwa Damon reports on the latest bombings in Homs and the people who are suffering.

Rick Santorum made a statement about theology, Christianity and President Obama that left many questioning his intent.

The RidicuList defends the idea that Brad Pitt could play Newt Gingrich in a movie.

Reporter's Note: President Obama gets a letter from me every day. I get writer's cramp. It's a fair trade, I guess.

I read earlier today something which I think I already knew: Your favorite movie is "The Godfather."

Not a bad choice. Certainly it is a fine piece of filmmaking. I always wonder, however, what such choices tell us about the chooser.

It could mean that you just love the intertwined levels of involvment for generations of the same family wrapped up in an illicit trade. (Hey, it wasn't all olive oil). Or maybe you love the character development; the doomed future of young Michael who will fall to the family trade despite his father's hopes. Or maybe you just love the whole horse head scene. Who knows, right?

As for me, I would probably say my favorite film is "The Hustler," or maybe "Miller's Crossing," or...well, I'm not sure, but that's because I was once a film critic. Asking me to name my favorite film is like asking an art critic to name his favorite painting out of the thousands he has seen.

As a theme, however, I am most assuredly drawn to struggles of underdogs. I love the hard won triumph by the person who has little reason to believe it will come his or her way.

Not sure if that suggests I like winning or losing, or if...as Kipling says...I've learned to see both of those imposters for just what they are.

As I write this I am flying back to DC from New York. Beautiful view of Manhattan out the window. I could see all the lights of Times Square a moment ago, and now I can just make out the beacon on the Statue of Liberty. Perfect night.
Call if you have a moment.

Tonight on AC360°, Anderson is talking with Bob Baer and Fran Townsend about the growing calls to arm the opposition in Syria and end the humanitarian crisis there. We want to know your thoughts. 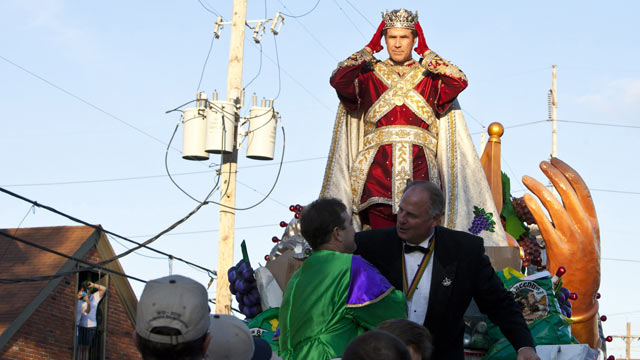 Actor and comedian Will Ferrell greets fans as he reigns as King of Bacchus in the 2012 Krewe of Bacchus Parade on February 19, 2012 in New Orleans. (Photo credit: Skip Bolen/Getty Images)
February 20th, 2012
04:10 PM ET

Staff:
"Frank the Tank gets set to put the raucous in Bacchus."
Kat

Viewer:
"Will Ferrell goes through intensive auditions for Game of Thrones."
Clark