Reporter's Note: President Obama gets a letter from me each day. I assume that half of the public approves.

So our latest poll has you with half of the public approving of the job you’re doing. I don’t know if I should say “congratulations,” or “I’m sorry about that.”

Certainly in the sense that it is a better number than you’ve seen in quite some time, you have some reason to be pleased with yourself. Heaven knows you’ve been pounded with awful headlines for a long time about your previously abysmal ratings. But then again, that half the people like the job you're doing is hardly a rousing endorsement, is it?

I would dare say in most workplaces, anyone who had only half of his bosses approving of the job he was doing would be brushing up the resume and collecting cardboard boxes. On the other hand, the presidency is not at all like a normal job. You are scrutinized by the whole nation; you routinely grapple with issues that make people fighting mad no matter who is addressing them; and to be honest, most of us can judge you only based on what we read in the news. The vast number of Americans have to base their opinions on nothing but vague, distant impressions. I would suspect that only a few voters can recite what you’ve done– or not– with reliability. And yet, everyone seems to have an opinion.

Ah well. For now, I suppose all you can do it cut some cake, do a little celebrating and get back to work. After all, you and I both know how quickly these numbers can change, and 50 percent approval will look awfully good if you stray down below it again.

I’ll be working in New York tomorrow. If you’re up that way give me a call and maybe we can grab lunch. We seem to have such a hard time connecting here in D.C. 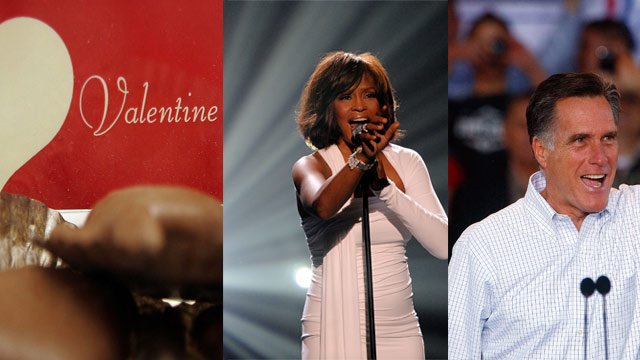 The world lost a musical icon last Saturday when Whitney Houston, 48, was found dead in her suite at the Beverly Hilton. Her funeral will be televised this coming Saturday from her church in Newark, New Jersey. Anderson spoke to Houston’s pastor and friend, Marvin Winans, who’s coping with the loss; he’ll be delivering her eulogy. Earlier in the week, Houston’s close friend Kelly Price told Anderson that the singer was “happy, celebratory” when they performed together at a club two days before Houston’s death. Price said she saw her friend drinking champagne – although not excessively. But, a source said Houston was drinking heavily at the Beverly Hilton on two mornings last week; she ordered her drinks before 10 a.m. from the lobby bar and in the pool area. Houston’s cause of death has been “deferred”, as stated on her death certificate, but the prescription pills found in her hotel room are now the focus of the investigation. In light of the tragic news, Anderson spoke to HLN’s Dr. Drew and CNN’s Dr. Sanjay Gupta about the growing epidemic of dangerous prescription drug combinations, especially when used with alcohol.

Syrian President Bashar al-Assad announced a constitutional referendum on Wednesday, set to take place February 26. While his government hailed it as an important reform initiative, the city of Homs and other towns continued to be pummeled by shelling. On Thursday at least 70 people were killed, according to a Syrian activist group. CNN’s Arwa Damon spoke to Anderson on Wednesday from the embattled city of Homs. She witnessed the despair and violence described by the Syrian activists we’ve spoken to over the past couple weeks.