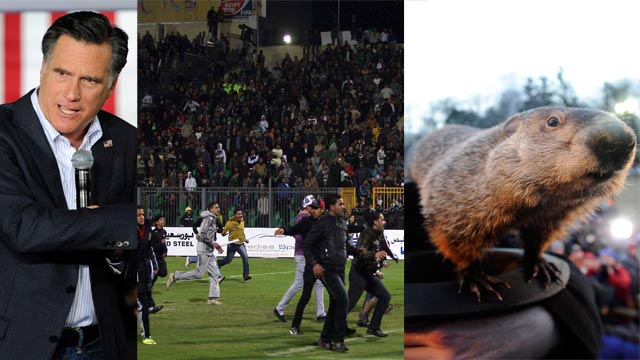 One year after the Egyptian revolution began, 79 people died in a violent riot after a soccer game in Port Said, Egypt. Egyptians began three days of mourning on Thursday and the newly-elected parliament erupted in anger over the national tragedy. Eyewitnesses said they were horrified when police stood idly as many fans tried to flee the stadium only to find a locked steel gate blocking their escape. The soccer massacre sparked violent riots in the country. At least 900 were injured in Cairo. Ben Wedemen reports the latest from Cairo on AC360 tonight.

Harry Bostick, a former IRS investigator, had three DUI’s on his record when he was pardoned by former Miss. Gov. Haley Barbour. While he was awaiting approval for the pardon Bostick was arrested in a fourth drunk driving incident that left 18-year-old Charity Smith dead. Yet the pardon was still approved for his previous crimes. Join us tonight for Ed Lavandera’s report.

Punxsutawney Phil says there’s six more weeks of winter left, but some other groundhogs beg to differ. Tune in to tonight’s RidicuList for more on this controversy!

For real-time coverage of the Nevada caucuses on Saturday, watch the political team on CNN starting at 6 p.m. ET.

And Super Bowl XLVI weekend is right around the corner! Will you be rooting for the Giants or Patriots?

If you thought you had the best boss around, you should know that one man in Australia is now dubbed the country’s "most generous boss" after he gave up to $30,000 in bonuses to each of his 18,000 employees.