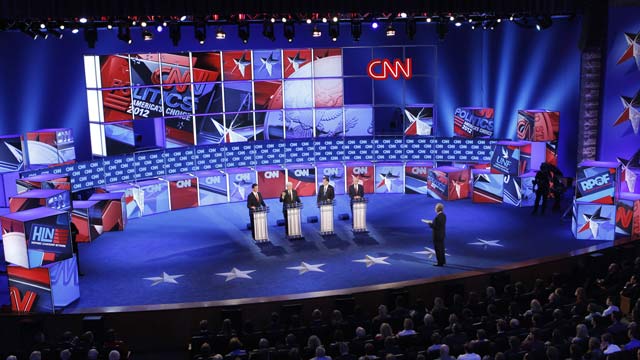 Raw Politics: Florida face off: There will be blood

If you’re looking for a haven of sanity and logic, Florida wouldn’t necessarily be your first stop. But Republicans have got no choice: Tuesday’s vote may be the party’s last shot at imposing order on the spiraling chaos of the primary season. So far, signs aren’t promising.

The GOP race looks like a dead heat in the CNN Florida poll released yesterday, with Romney at 36% and Gingrich at 34%. A 25 point Romney lead in our last poll basically evaporated in just two weeks’ time.

But is the race really neck-and-neck? Maybe. Probably. But the truth is: right now, nobody really knows. We’re seeing significant day-to-day swings in the numbers, with both men trading momentum over the course of our three-day poll: Gingrich holding an undeniable advantage one day, Romney holding a significant edge the next. We’re now in uncharted territory - this late in the season, this is not how Republican presidential campaigns work.

What’s driving the numbers? The evidence isn’t all that clear-cut. But here’s one clue: unfavorable ratings for both men are rising by double-digit margins in virtually every poll. In other words, as the campaign grows bloodier by the day, it’s as though Florida Republicans wake up each morning and think to themselves: Who do I like less today?

Take today: this afternoon, Romney’s campaign put out a release calling Gingrich “Dr. Newt and Mr. Hyde,” as Romney himself spent the day slamming the former speaker at virtually every stop. And Gingrich accused Romney of “lying,” “grotesque hypocrisy,” and treating his GOP rivals as though they’re "stupid." (In fact, wrapped all the week’s anti-Romney attacks in one line that stands as a masterpiece of the genre: “…[W]e’re not going to beat Barack Obama with some guy who has Swiss bank accounts, Cayman Island accounts, owns shares of Goldman Sachs while it forecloses on Florida and is himself a stockholder in Freddie Mae and Freddie Mac while he tries to think the rest of us are too stupid to put the dots together, to understand what this is all about.”)

Florida is a must-win state for Mitt Romney if he wants to hold on to the electability argument that had been the chief strength of his campaign before primary season voting got underway. This is also a must-win state for Newt Gingrich: it’s a closed primary, which means only Republicans can weigh in – so if Romney wins, Gingrich’s argument that he’s the only candidate who can unite and excite the conservative base will take a major blow. Right now, Romney’s got the establishment riding to the rescue, with a wave of GOP figures from Bob Dole and John McCain to Ann Coulter shifting into anti-Gingrich emergency mode. And Gingrich has been pulling in the crowds, with thousands crowding rallies from Sarasota and Naples. This is a winner-take-all state, with 50 delegates at stake; there’s no prize for second place.

Which brings us to tonight. As of now, tonight’s debate may be their last face-to-face showdown for the next month or so. Debates have been critical this cycle, and maybe none more so than tonight’s: Whoever comes out on top tonight stands to grab critical momentum heading into the home stretch here in Florida – so both Romney and Gingrich are likely to come out swinging.