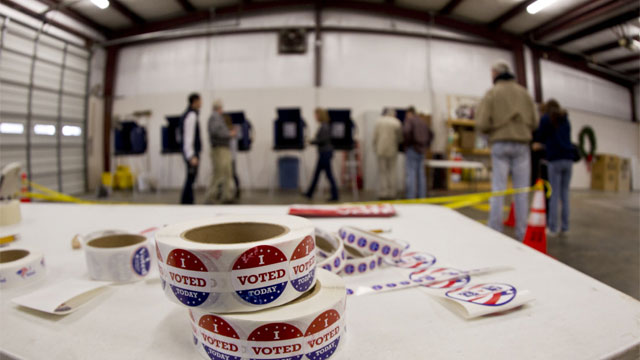 We’re live at the mothership, CNN Center in Atlanta, all night tonight, as exit polls and returns start to roll in from South Carolina. Opinion polls tracking the Republican primary race have swung back and forth wildly in this state - and now, some of that movement's starting to show up in national surveys too. As the exit polls and vote counts come in tonight, here are a half a dozen of the numbers we'll be keeping our eye on:

Early in the night:

–We'll be looking at the percentage of voters in exit polls who say they made their decision in the race's final days. We already know Gingrich likely has the advantage with that group: most surveys have indicated a double-digit swing in his direction over the race's final week, with the trend accelerating as the race entered the home stretch. If a plurality of voters say they made their pick in the contest's closing days, it could be a good sign for Gingrich.

–Newt Gingrich's late rise in the polls seems to have been driven almost entirely by a surge in Tea Party support. If a plurality of voters tonight say they back or are sympathetic to the Tea Party: it could mean a tough night for Mitt Romney.

–Republican primary and caucus voters have generally said a candidate's electability was the most important trait in making their presidential pick. And those voters have consistently said Mitt Romney was their most electable option. But in Iowa, voters seemingly went with their hearts over the heads: just 13% of them thought Rick Santorum was the best candidate to reclaim the White House; nearly four times as many Romney was the strongest fall contender. But that gap didn't translate into a Romney win. We're going to pay close attention to that electability number tonight: Do voters still think Romney's got the best shot at beating President Obama in November?

–This is the first vote of 2012 that promised to feature a stark gender divide: a majority of women Republican voters had been backing Mitt Romney. Among men, an even bigger majority backed Gingrich. Does that gap get wider, in the wake of his wife’s sensational interview – or does the rising Newtmentum erase it?

–One more number to keep an eye on, once all the votes are in: Republican turnout. All three states weighing in so far have featured contests where independents and Democrats can participate (In Iowa, they can register as Republicans the day of the caucuses and still vote.) And in a year without a competitive vote on the Democratic side – and independent draw Ron Paul in the GOP race – so far those voters are participating in the GOP primary season contests in far greater numbers than they did last time. But despite registration gains: Republicans aren't. The number of registered Republicans who voted in nominating contests in Iowa and New Hampshire actually declined from their 2008 totals.

That metric is important because it gives a hint of "voter intensity" levels – in other words, just how motivated the base may be. Motivated voters donate, they volunteer. And most importantly: they show up to vote on Election Day.

In most recent national opinion polls, the "intensity gap" - which measures the difference in enthusiasm levels between the two parties – has narrowed dramatically. The deeper we get into primary season, the less excited Republican voters seem to be about this year's presidential race, while Democratic excitement grows.

South Carolina has featured one of the most fluid and exciting contests to date. It's not a swing state; instead, it's home to the sorts of conservative, evangelical and Tea Party voters the Republican Party needs to turn out in significant numbers to win this fall. The campaign home stretch in South Carolina has featured images of half-empty venues and sparsely-attended rallies. Will Republican turnout rise today?