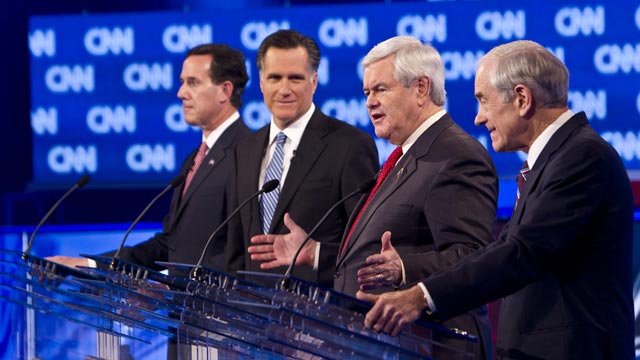 10:45 p.m.
Gingrich may not have won a majority of the state's votes - but as of this moment, he's got 23 of its 25 delegates; no one else has even gotten one yet. That haul puts him back in the delegate race, trailing Romney by just 5. Up next: the January 31 Florida primary - a winner-take-all contest, with 50 delegates at stake.

10:17 p.m.
More numbers to think about: Gingrich's favorability numbers nationally in the January 13 CNN/ORC poll: 28% favorable to 58% unfavorable. Among Republicans only: 49%, down 12 points from his 61% favorable rating in November.

9:50 p.m.
If you've never seen it before: that was Newt Gingrich's entire stump speech, almost word for word.

9:31 p.m.
Gingrich: “It’s not that I am a good debater, it’s that I articulate the deepest-felt values of the American people.”

9:12 p.m.
Looking for good news for Romney tonight: a solid showing among moderates, liberals, non-evangelicals, those with incomes over $200,000, and people who do not support the Tea Party. The problem, of course, is that he was running in South Carolina.

9:10 p.m.
Question on everyone's mind: will Gingrich "Secretary of Attack" Chuck Norris join him on stage tonight? A nation waits.

8:45 p.m.
Great job by Santorum on the withdrawal fakeout!

8:03 p.m.
Hearing a lot more Newt in this Romney election night speech than there was in New Hampshire. Not hearing: any congrats on his win.

7:32 p.m.
The most important candidate quality for Republican voters today? Same answer they've given all year: Picking a candidate with the ability to beat President Obama. What's new is the candidate who has the advantage among voters who said picking a winner was their top priority: they gave Gingrich the edge over Romney in early exit polls.

7:22 p.m.
Losing Newtmentum? Late deciders gave Newt Gingrich a 26-point edge over Romney – but that gap dropped by more than half among those who decided today, to 42-32.

7:20 p.m.
Endorsements don’t matter, Exhibit 5,893: Nikki Haley went all in for Romney, stumping with him across the state, And she had 66% approval among voters today. So who did voters who approve of her back in early exit polls? Newt Gingrich, 40-33.

7:17 p.m.
What woman problem? Throughout the South Carolina race, a majority of women Republican voters supported Mitt Romney, while men backed Gingrich. The big question mark heading into tonight had been whether (or how much) Gingrich could expect that gender gap to widen. Instead, he virtually erased it. Gingrich, as expected won men handily, by a double-digit margin. But he won women too, by 5 points over Romney, 37 to 32%.

7:15 p.m.
Fifty-seven percent of the voters in early exit polls today said it’s very important that a candidate share their religious beliefs - and 46% of those voters backed Newt Gingrich. Romney came in a distant second, at 22%. For those voters who didn’t think shared religious beliefs were all that critical, Romney was the top pick, at 43%. Gingrich was second, at 29%.