The odd saga that is the Joran van der Sloot murder case continues as trial is set to begin. CNN's Tom Foreman reports.

Video: Rick Santorum's past in Pennsylvania

Jason Carroll reports on Rick Santorum's record and connections in Pennsylvania, the place where his political career began.

CNN's Anderson Cooper uncovers one of the secrets used to keep those tiara-wearing toddlers so bubbly.

Reporter's Note: The White House is certainly pleased with the latest dip in the unemployment rate, but as I note in my daily letter to the White House, they are not crowing too loudly.

You seemed to greet the latest jobs report with a good deal of caution today, despite the fact that it brought good news, and I think that is wise. In my experience, it is always dicey to start crowing about hiring trends anywhere near the holidays. Whether the numbers are “seasonally adjusted” or not, it is easy for them to be rubbery. And if you hang your hat on them, you might find it on the floor later.

On top of which, it’s just way too early.

Republicans can stamp their feet about the jobless rate, but if it improves through Election Day, they’ll just be setting themselves up. I can just hear you on the stump a week before the vote. “Oh yes, my Republican friends have been screaming for months about how I have no plan for the economy. But unemployment has steadily dropped since the first of the year, and it now below 8 percent. Where are those critics now?” (cue the wild applause and cheering)

Conversely, if the good news turns out to be a blip and the jobless rate stalls where it is or even gets worse, you’ll get the smack down. Republican challenger: “This president doesn’t understand how this economy works. It’s time to get a president who does! (cue the wild cheers)” Actually, I didn’t make that part up. That’s a quote from a real Mitt Romney speech, and even if he doesn’t wind up with the nomination, you can bet your paycheck that you’d hear the same thing from any of the others if the jobless rate does not continuing improving.

Like I said, it’s early. So much can happen between now and next November. So, like I said, good move being cautious.

It must be very tempting to throw those numbers hard at your critics, but you’ll have to find out first how solid they are…and as the old saying goes, “only time will tell.” 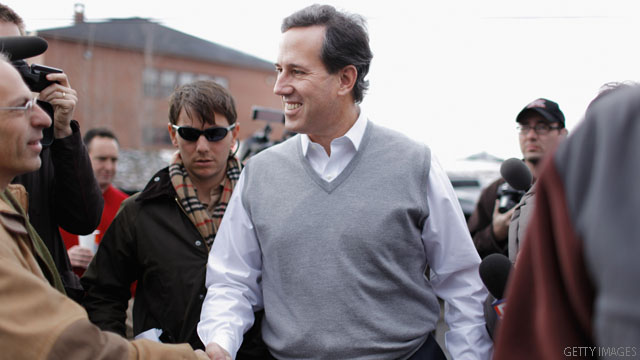 Editor's Note: Ralph Reed is founder and chairman of the Faith and Freedom Coalition. He joins Anderson tonight on AC360° with a preview of what to expect from Evangelical voters in the Republican presidential race. Tune in at 8 and 10 p.m. ET.

(CNN)–One of the most important sub-plots in the Iowa caucuses was which candidate would win the support of Iowa’s evangelical voters, who comprised 60 percent of the vote in 2008, and according to the CNN entrance poll, comprised 58% of the vote Tuesday night.

In the media’s instant analysis, a “splintering” of Iowa's evangelical vote among numerous candidates made it difficult for them to influence the selection of the Republican presidential nominee.

But this narrative is based on a caricature of evangelicals and other voters of faith. Consider this: 61% of self-identified evangelicals who attended a caucus Tuesday night in Iowa voted for a candidate who is either Roman Catholic (Newt Gingrich and Rick Santorum) or Mormon (Mitt Romney, who won the caucuses, besting Santorum by eight votes ).

Here's how the evangelical vote broke down: 32% for Santorum, 18% for Ron Paul, 13% each for Romney, Gingrich and Rick Perry, 6% for Michele Bachmann and 1% for Jon Huntsman.

This suggests a more nuanced and complex portrait of voters of faith. They are often crudely portrayed as voting based solely on identity politics, born suckers for quotes from Scripture or “code words” laced in the speeches of candidates appealing to their spiritual beliefs.