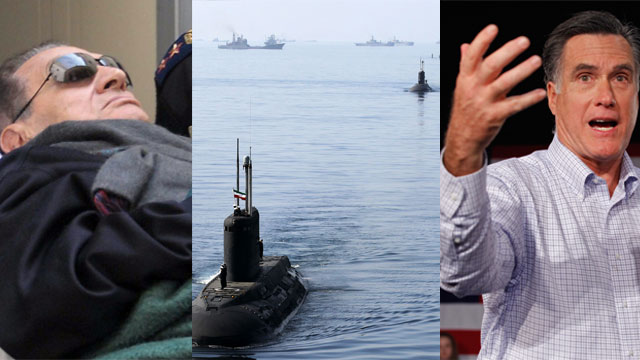 Former Massachusetts Governor Mitt Romney pulled ahead of former Pennsylvania Senator Rick Santorum in Tuesday’s Iowa caucus by eight votes, the closest ever GOP presidential contest. In entrance polls, caucus-goers named electability as the most important quality in a candidate. And step aside Wolf Blitzer, two Iowa women stole the show when they explained a missing link in the highly-anticipated results Tuesday night. Finally, what does this caucus show us? Here are five things we learned on Tuesday night. But, if you’re still unsure how the Iowa caucuses worked, Tom Foreman explains the Republicans’ caucus and how they differ from the Democrats’ “raucous caucus.”

Tension is rising after the United States rejected Iran’s warning not to return a warship “to the Persian Gulf region.” The semi-official Fars News Agency reported that Iran’s defense minister said the U.S. presence “does nothing but create mayhem, and we never wanted them to be present in the Persian Gulf.” Iran’s warning comes after it threatened to close the Strait of Hormuz, a critical shipping channel, in opposition to sanctions proposed by France, Britain and Germany . What does that mean for you? Oil prices are going up!

And in Egypt, the third round of parliamentary elections started on Tuesday. The first two rounds showed a strong Islamist victory between the relatively moderate Muslim Brotherhood’s Freedom and Justice party and the conservative Al Noor Salafi party. Also, during the trial of former President Hosni Mubarak, prosecutors showed acts of police brutality against protestors that were recorded on video. However, Mubarak’s lawyers denied the accusations.

We monitored the results in Iowa all night, and now we're talking about what Romney’s win means for the next race. Today Sen. John McCain endorsed Romney in New Hampshire, telling a crowd, “we need to make sure that we make Mitt Romney the next president of the United States of America.” And following Tuesday’s results, Michele Bachmann suspended her presidential bid. Tune in tonight at 8 and 10 p.m. ET — we’re Keeping Mitt Romney Honest about ads created by a Super PAC supporting his candidacy.

A German man appeared in court on Wednesday after he was arrested on Monday for arson in Los Angeles for a string of 52 fires that caused $3 million in property damage. A German official said the man is also under investigation in that country – his native homeland - for the same thing. And here’s where the story gets even more bizarre. Officials say his motive might be his mother's arrest on December 28. She was the subject of an international arrest warrant for 16 counts of fraud and three counts of embezzlement. The charges? She allegedly failed to pay for her breast augmentation, among others. Tune in tonight for more on the story at 8 p.m. and 10 p.m. ET.

The body of a young woman was found dead on Queen Elizabeth II’s estate in Sandringham, England. Police say the body has been there anywhere between one to four months. Tune in tonight for more on the investigation and what Buckingham Palace is saying about this murder mystery.

The dramatic Iowa caucuses are behind us, so we’re looking ahead to see how close the results will be in the New Hampshire Primary on Tuesday, January 10. The CNN political team will be at it again, be sure to tune in for our special coverage at 7 p.m. ET.

The head of the Arab League called for an end to the government crackdown in Syria. Nabil el-Araby said while tanks pulled out of cities, there are still snipers and killings. But international organizations doubt the credibility of the Arab League’s delegation. The world is watching to see if the bloodshed in Syria will end before more innocent civilians are killed.