In 3rd place on Anderson Cooper's 2011 RidicuList countdown is "those who criticize love" by rejecting Courtney and Doug.

Anderson Cooper talks to a journalist who went undercover into Homs, Syria, to capture stunning video of the crackdown.

The Arab League is monitoring in Syria, but their findings and their leader are questionable. Anderson Cooper reports. 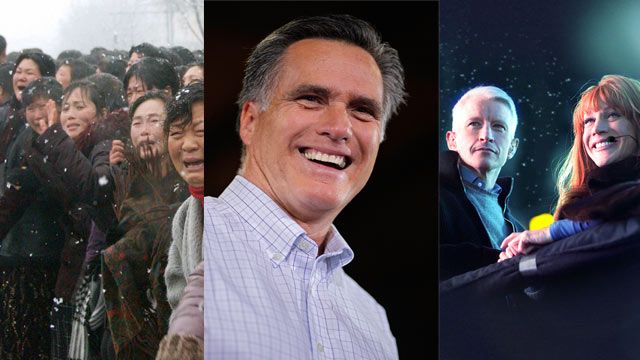 On Tuesday the Arab League began monitoring the situation in Syria amid new reports of bloodshed and fatalities which one activist called a "genocide." Join us tonight for an exclusive interview with a German journalist who says he snuck into Syria and witnessed people dodging snipers and throwing bread to each other to stay alive. He'll describe the violence that the Syrian government continues to deny. Many are questioning the choice of Lt. Gen. Mohamed Ahmed Mustafa al-Dabi to head the Arab League mission – We’re Keeping Them Honest at 8 and 10 p.m. ET.

Elizabeth Cohen reported on forced sterilization implemented under eugenics laws in the United States decades ago. One victim told her he was taken to the hospital and unknowingly received a vasectomy ordered by the state of North Carolina because they did not find him fit enough to be a parent.

END_OF_DOCUMENT_TOKEN_TO_BE_REPLACED

Editor's note: In the newest poll, Romney is in the lead, Rick Santorum rose to third place and Newt Gingrich's slid to fourth. Expert analysis on what this means six days before the Iowa caucus on AC360 at 8 and 10 p.m. ET.

A new survey of people likely to attend Iowa's Republican caucuses indicates that the former House speaker's support in the Hawkeye State is plunging. And according to a CNN/Time/ORC International Poll, one-time long shot candidate Rick Santorum has more than tripled his support since the beginning of the month.

The poll's Wednesday release comes six days before Iowa's January 3 caucuses, which kickoff the presidential primary and caucus calendar. The Iowa caucuses are followed one week later by the New Hampshire primary.

Letters to the President #1073: 'Survival of the fittest'

Reporter's Note: Republican contenders are tearing it up in Iowa, while the President cools it in Hawaii.

It must be very satisfying for you and your fellow Dems to watch the Republicans eating their own in Iowa these days. Winning is easy if the other team turns on itself.

Then again, as I like to remind folks, the political news cycle is so darn short these days, I wouldn’t even bet on Tuesday’s troubles having an effect on Thursday any more. The GOP will, in all likelihood, grind through all these differences and eventually rally around a candidate, and then it will be game on.

Frankly, sometimes I think that the smartest play for any candidate would be to keep a low profile, just generally keep in the game, and wait until the last possible moment to try to surge to the front.

We used to play a game in Junior High gym class called One Acre. The idea was that everyone spread out all over the basketball court, the coach threw three big red balls into the mix, and we started whipping them at each other as fast as we could. If you were hit, you were out; if you caught the ball, the thrower was out.

Although it was ostensibly an “every man for himself” situation, inevitably, friends formed coalitions which would surround and pick off the most threatening opposition, very much in the same fashion that you pols gang up on front-runners in big races. The more the field was whittled down however, the more you would see those confederacies fall apart, and without warning erstwhile allies would turn on each other.

Sometimes it would look like everyone was about to be wiped out in the chaos, but one player would always emerge; stronger, quicker, better positioned than the rest. And in the end it would come down to a titanic battle between the last two men standing.

That’s what you have to look forward to, no matter how messy things may look on the Republican side now. Not trying to ruin your vacation...just saying.

Hope you’re having fun on the beach. It has been raining here, so you picked a good time to be away. Give me a call if you can, and let me listen to the surf, eh?

BTW-I forgot to mention: Did you see Drew Brees break the NFL record for most passing yardage on Monday Night? Magnificent! Who Dat!

A behind-the-scenes look at Radio City Music Hall, with a New Year's Eve message for Anderson Cooper and Kathy Griffin from the Rockettes. Don't miss Anderson and Kathy's live show from Times Square on Saturday at 11 p.m. ET!