A man was in prison until DNA proved he was innocent. Gary Tuchman reports on the risks of using bite mark evidence.

The eighth spot on Anderson Cooper's Top Ten of 2011 RidicuList countdown belongs to William Tapley, Third Eagle of the Apocalypse.

Ron Paul is questioned by Gloria Borger about racist articles printed in a newsletter published under his name in the 1980s and 90s. 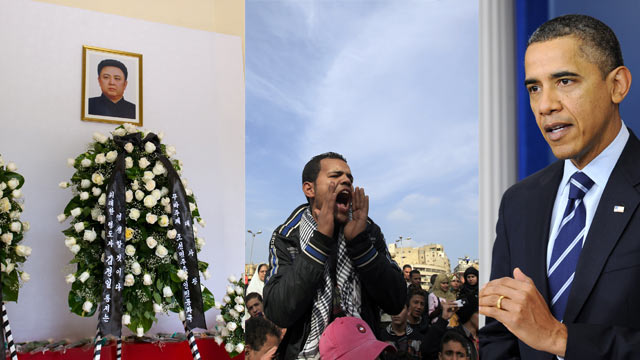 The military promised a democratic transition in Egypt, but 20 Egyptian police officers were caught on video beating a woman and stripping off some of her clothes. The violent images have fueled more protests. We spoke to Mona Seif, a female activist, who said “what we have thought were things they never dared to commit, are things they are now doing publicly.” AC360 is Keeping them Honest.

With the death of North Korean dictator Kim Jong Il questions still remain about his son Kim Jong Un’s succession. According to a South Korean state-run news agency he gave his first military orders while his father was still alive. Earlier this week we saw emotional video of North Koreans crying for their ‘dear leader,’ but Keeping Them Honest, we looked at the lies the dictator fed his people throughout his life. Also in an exclusive interview, we spoke with Laura Ling, who spent five months detained in North Korea and her sister, journalist Lisa Ling on their reaction to his death.

END_OF_DOCUMENT_TOKEN_TO_BE_REPLACED

Letters to the President #1066: 'Another impasse'

Reporter's Note: Republicans and Democrats in Congress have once again entered a standoff over pending legislation. I like to think I am fairly persistent in my letter writing, but I’ve got nothing on that crew…

How is this possible? How can it be that every couple of months the two parties manage to paint themselves into a corner on Capitol Hill from which neither one seems able to emerge?

I know that you and the Dems are paying a lot of the blame for this one at the feet of the Republicans, and there seems to be some evidence supporting the notion that they are driving this particular crisis more than your party. That said, as the old saying goes, it takes two to tango and without a doubt both parties have been steadily prodding at each other for some time.

Now, I fully understand that people on both sides of the aisle say they are merely doing what their constituents want, and I don’t doubt that it’s true. But here is the weird part: Somehow, amid all this representative democracy run amok, it feels oddly as if no one is really doing what anyone really wants. Very little is getting solidly passed, and about the same can be said about what is being defeated. Everything is a war of attrition. It’s like watching bout after bout of boxing with every fight coming down to a draw, or such a controversial split decision, it seems like we never have a genuine winner.

How one breaks an impasse like this, I can’t really say. All I know is that unless someone figures out how to get things moving one way or the other, we could be in for a long, frozen season.

Did you notice, btw, that this is the first day of winter?

An earlier interview with Ron Paul ended when the Congresman removed his microphone during questioning about controversial newsletters sent using his name in the 1980s and 90s . Watch the preview video and see more of the conversation on AC360 at 8 and 10 p.m. ET.

Ray Krone was arrested for the sexual assault and brutal murder of a female bartender in Phoenix, Arizona in 1991. The case rested largely on bite mark evidence on the body of the victim, 36-year-old Kim Ancona. Krone was dubbed by the media as the “snaggletooth killer.” He was found guilty and recieved the death penalty.

“I was called a monster, then an unremorseful killer, then sentenced to death and shackled and taken right straight to death row,” says Krone.

He vehemently maintained his innocence and fought for a retrial. In 1996 Krone was given a second chance to prove he didn’t commit the murder. Again, the same bite mark expert's testimony portrayed him as guilty, but this time Krone’s defense team had their own bite mark experts to rebut the prosecution.