A man is serving 30 years for killing his wife, but some forensics experts say the evidence doesn't prove the crime. Gary Tuchman reports.

Egyptian activist and blogger Mona Seif describes the reported violence against women at the hands of the military in Egypt.

Anderson Cooper counts down the best of "The RiducuList," as voted by the viewers. Number 9 features celebs and their animal look-alikes.

Caught on camera, a woman is violently attacked by police. Who is accountable? Dr. Sanjay Gupta is Keeping Them Honest.

Letters to the President #1065: 'Keeping secrets'

Reporter's Note: I write to President every day, although to him I am sure it must seem like the letters come with even greater frequency. Ha!

Perhaps you, like me, read an interesting article in the New York Times today about how surprised intelligence services worldwide were by the death of Kim Jong Il. In simple terms, the article says that North Korea does a remarkable job of keeping its secrets from the rest of the world, even when they are as big and tantalizing as the passing of a long time leader. (Just think of the temptation to tweet: The dear leader is gone!)

And you have to admit, the fact that no one seemed to have a clue that this had happened until he was well dead and presumably funeral plans were already underway is pretty impressive.

And you know how they pull off such tricks? They limit their secrets to those who need to know them, and those people keep their mouths shut. What a novel concept! In and of itself, the practice appears to have successfully thwarted many if not most of our efforts to spy on them no matter how many great satellites we launch or listening posts we set up.

Now, I'm not suggesting for an instant that we ought to be that secretive, nor do I think such behavior would be good for our democracy.

And, to be honest, I imagine the "discipline" of the North Korean insiders in guarding their affairs has a lot to do with the very real fear that any leaks to Vanity Fair, for example, would result in an execution before sundown.

Still, sometimes I wonder if a little more descretion might be a good thing for Washington, if only so that alliances, plans, and ideas have a little time to take shape and be fairly considered before the whole world weighs in.

Just a thought. I'm writing this on an airplane back from Atlanta. If you were here, we could talk it over. But you're not. Oh well.

Tonight on AC360: A case of murder or suicide?

Warren Horinek is in a Texas prison serving a 30-year sentence for killing his wife, Bonnie, in Fort Worth, Texas in 1995. Horinek says his wife's death was a suicide. Of course, prisons are full of people who say they’re innocent, but what makes this case much different is the state prosecuting attorney originally assigned to the case, and one of the investigating officers at the crime scene, believes suicide was the likely cause of death.

So how could Horinek be tried for a crime the prosecuting attorney thought was more likely a suicide? A judge appointed private attorneys to prosecute the case, because Texas law allows them to pursue prosecutions. Those attorneys hired blood stain specialist Tom Bevel, who is a sought-after expert for prosecutors and defense attorneys. Bevel testified that blood found on Horinek’s T-shirt was most likely caused by blood spatter from being near the weapon when it was fired.

Other blood stain experts who have examined this case say it’s more likely that the blood came from Horinek administering CPR to his dying wife.

END_OF_DOCUMENT_TOKEN_TO_BE_REPLACED 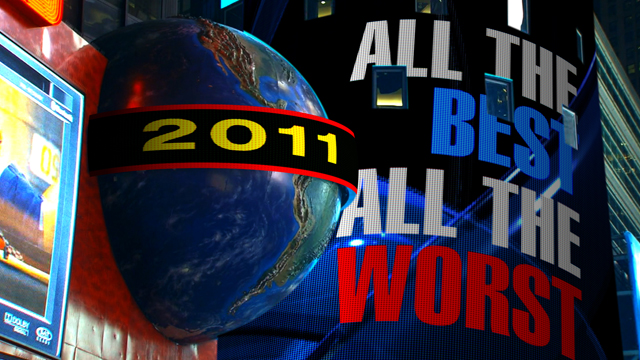 It’s that time of year again! AC360° and Tom Foreman showcase the best and worst moments from the past 12 months: politics, pop culture, sports, big news, web videos and more!

This year we’re asking you, our 360 viewers, to tell us what you rank as the best and worst of 2011. Was the Royal Wedding the top news story?  Did Anthony Weiner take home the prize for worst political move?  Was the honey badger clip the greatest viral video?

Vote on our blog now and watch AC360° at 7 p.m. ET on Christmas Eve and 8 p.m. ET on New Year’s Eve when we reveal the results! Speaking of New Year’s Eve, we hope you'll also join us for Isha Sesay's webcast that night at 10 p.m. ET and Anderson's show with Kathy Griffin live from Times Square at 11 p.m. ET!

END_OF_DOCUMENT_TOKEN_TO_BE_REPLACED

Dr. Sanjay Gupta details the lies told to North Koreans about their leader Kim Jong Il over the course of his life.