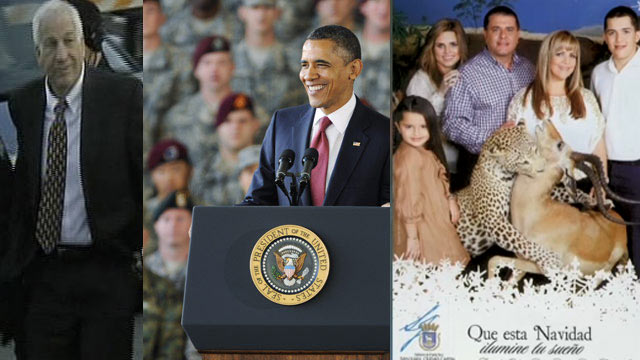 Congress delayed a bill to make Congress members obey the same rules the rest of us do, when it comes to making money on inside information. Keeping Them Honest, we called every lawmaker on Capitol Hill and asked if they would support the STOCK Act.

Jerry Sandusky waived his right to a preliminary hearing on child sexual abuse charges. Some of his accusers were prepared to testify against him. Yesterday the attorney for alleged victim six told Anderson that his client was, “ready, but Jerry Sandusky ran away.”
Also, find out about the apparently close ties between the former Penn State police chief and Sandusky.

With the death toll in Syria now 5,000, according to the United Nations, the Secretary-General is calling for intervention, saying “it is time for the international community to act." A medical student spoke to Anderson about the violence he’s witnessed in Homs.

From awkward family Christmas cards to thieves with “Christmas balls,” and a government official who landed himself on our RidicuList, it’s been an interesting holiday season!

We’ve told you about the suspected hazing-related death of 26-year-old Robert Champion at Florida A&M University. Now, another alleged hazing incident just weeks before the drum major died has many asking if warning signs were missed. We’re Keeping Them Honest. Tune in tonight at 8 and 10 p.m. ET.

An Afghan woman who was jailed after reporting she was raped by her cousin’s husband is now free - but she is still under pressure to marry her attacker. She described the incident in an exclusive CNN interview: “When my mother went out, he came into my house and he closed doors and windows. I started screaming, but he shut me up by putting his hands on my mouth.”

U.S. troops in Iraq are returning home by the end of 2011 after an eight-year military mission. Today at Fort Bragg, North Carolina, President Obama hailed their service and bravery.

Anderson wants you to vote for your favorite RidicuList of 2011. We’ll air the Top 10, one each night, beginning Monday, Dec. 19. Vote now and share the poll with your friends!

In a country where bear bile is used as a hangover cure, fourteen bears were rescued from a bear bile farm.