Video: The ball, before it drops

AC360's Isha Sesay gets a behind-the-scenes look at just what it takes to ring in the new year.

Have a look behind the curtain as the team gets ready for CNN's fabulous New Year's Eve blow-out.

END_OF_DOCUMENT_TOKEN_TO_BE_REPLACED

We asked revelers in Times Square for a single word to define the year. What's your word? Tweet it to @AC360 using #CNNNYE.

Letters to the President #1076: 'Admitting mistakes'

Reporter's Note: President Obama, like all of us, is facing the new year. Fortunately he can, once again, count on my daily letters for guidance.

So here we are on the last day of the year. For many of us it will be a time for taking stock; thinking about all that has happened in the past twelve months, what we got right and what we got wrong. But not for all of us, and I imagine, not for you.

Please don't take that as a slight, it is just something I have noticed with every president I have ever met. They just about never admit that they were wrong about anything. Even years after they have left office, they possess a somewhat unique instinct, compared to the general population, which seems to render it impossible for them to say they made a mistake, even if said mistake was quite obvious and understandable.

Now, that said, I tend to think that maybe...just maybe...you're not so much that way. Granted, I can't precisely recall a moment in which you have publicly said, "My bad!". Certainly, you've never said such a thing on any major initiative.

However, once in a while you have shown a least a slight inclination that way on a few finer points of policy. As I have noted here before, I think that is a positive attribute, and I wish more of our presidents would lean that direction.

As for me, well, I am a very confident person who likes to consider his plans carefully. I too do not like to admit mistakes, and yet I could go on all afternoon about the mistakes I made in the past year alone. It's not because I am some sort of self-effacing masochistic, but rather because I believe in the ideals of accuracy and fairness. And although none of us can really judge ourselves all that well, if we recognize the old adage that "everyone makes mistakes" we can't very well toddle on all the time refusing to recognize our own failings on that front. It is, after all, the first step toward improving ourselves...and showing our true dedication to the notion of accountability.

Anyway, I hope you enjoy ushering in the New Year. Heaven knows we will!
Went for a spectacularly nice run this morning. You should have been there! 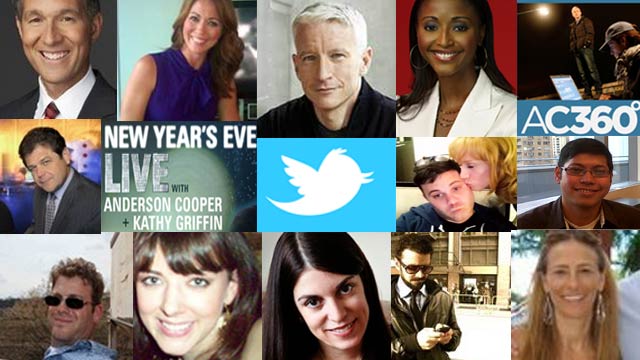 CNN's Candy Crowley tries to get a preview of Anderson Cooper's New Year's Eve show but Kathy Griffin has other ideas. Ring in the new year with Anderson and Kathy at 11 p.m. ET on Dec. 31!

Anderson Cooper and Kathy Griffin have hosted the most entertaining New Year's Eve show on TV for the past four years. Relive the unexpected moments, laughs and unique traditions. Join the party this New Year's Eve at 11 p.m. ET on CNN!

Tweet a New Year's Eve message during the show using #CNNNYE  for a chance to see your tweet on-air! You can also submit questions for Anderson and Kathy on the AC360 Facebook and Google+ pages. Tune in to see if they answer you live during the show!

Basil Al-Sayid, a 24-year-old man in Syria, was shot to death while documenting violence committed by the government. Anderson Cooper reports.